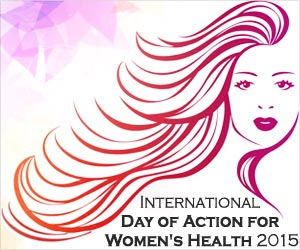 May 28 is marked as the International Day of Action for Women's Health.


The objective of this day is to build a movement around Sexual and Reproductive Health and Rights (SRHR) and give a platform to the issues faced by women and girls. Across the world, women are denied control of their own bodies and forced into early marriages, childbirth and sterilization. The International Day of Action for Women's Health intends to address this form of institutionalized gender violence against women. This is a day to remind governments across the world that women's health is crucial to the development of a nation.

Overall objectives of the International Day of Action for Women's Health:

Since its inaugural launch, the International Day of Action for Women's Health has been successful raising awareness on a number of issues including:

This year, the International Day of Action for Women's Health campaign aims at ensuring that the United Nations Post-2015 Sustainable Development Goals include women's sexual and reproductive health.

The campaign continues from 2014 when it was re-launched to account for SRHR in the Post-2015 Development Agenda. In May 2014, the Women's Global Network for Reproductive Rights (WGNRR) campaigned to revitalize and mobilize greater support and action for SRHR. Reflecting on the past 30 years, women's rights activists stressed the need to avoid reducing women's health to just maternal health. They also raised the critical issue of the need to take in account diversities among women and their actual needs. This year the campaign also includes sex education for youth.

Governments across the world are currently in the final stages of establishing the Post-2015 Development Agenda including a set of Sustainable Development Goals (SDGs). This year's call-to-action is to draw attention to the systemic violence and denial of sexual and reproductive rights of women. WGNRR has been collaborating with more than 20 international, national and regional organizations across the globe to demand inclusion of women's health rights into the Post-2015 Development Agenda.

The theme for this year is "Our Health, Our Rights, Our Lives! End Violence Against Women in ALL its Forms." The theme rightly centres the needs of women with a call-to-action to end violence in all forms. Sexual violence and denial of reproductive rights seriously damages the overall health and well-being of women across the globe. Whether it is a forced marriage, marital rape or forced sterilization, such violence deeply impacts not only the woman but the community at large. The theme captures the right of autonomy and decision making by women when it comes to their health and lives.

2015 is also significant in realigning women's health rights to the development goals of nations given the fact that no nation can make progress until and unless it achieves gender equity and justice.

India has a low-ranking when it comes to gender inequality and justice.

According to the United Nations Development Program's (UNDP) Human Development Report 2013, India ranks 137 out of 187 countries on the gender inequality index. This report assesses a country's performance on human development indicators like health, education and income. The gender inequality index measures the loss to a country's progress and human development due to gender inequalities on three counts: reproductive health, women's empowerment and labour market access. India scores low not only on a skewed sex ratio with 914 females to 1000 males but also lags behind in women's education, employment and health.

Gender violence in India is systemic and deeply entrenched. Not a day goes by without newspaper reports of and abuse, sexual harassment and molestation and rapes. From the Nirbhaya case in Delhi (2012) to the numerous child sexual abuse in schools in Bangalore and other cities across India, the facts and statistics on rape and child sexual abuse are staggering:

The story does not end with this. Gender violence in India interlocks with poverty, caste, class, religion, lack of sufficient public health resources and lack of education to routinely deny basic human rights to women and children. Other myriad forms of gender violence include child marriages, forced marriages, marital rape, forced prostitution, forced motherhood and denial of access to health resources. Gender violence is also insidious among adolescents and young adults often taking the form of subtle sexual harassment.

Women, who have been at the receiving end of gender violence, experience a deep sense of shame and dishonour coupled with feelings of low self-esteem. Loss of control over one's body and the inability to protect oneself has a significant psychological impact. Lack of choices and access to safe environments locks women into vicious cycles of violence and hurt. *Bhagya (33), *Sudha (28) and *Manjula (36), residents of a suburb in Bangalore have a similar tale to recount of their experiences of bodily violence, loss of control, access to healthcare and denial of human rights. All three women were forcibly married in their teens. Belonging to low-income households, none of them were allowed to complete their basic education. With no choice or say in their marriage, they were forced to contend with domestic violence and abuse in their husband's homes.

Bhagya narrates that being a teenager, her body was not ready for reproduction and she suffered three painful miscarriages. She had to bear the abuse of her husband and in-laws for not producing a child until she finally bore a child at the age of 22. She says that her overall health has been badly affected and she suffers from iron-deficiency anemia Working as a domestic household helper, she now understands her basic rights over her body and the importance of reproductive health.

Sudha's tale of woe began when she give birth to a girl at the age of 17. She had to put up with the curse of her in-laws and husband who blamed her for not producing a male child. She was forced to go for another pregnancy within a year despite her unwillingness. When the second child was also a girl, her in-laws and husband threw her out of the house. She finally returned with her two daughters to her parents' home. With the help of a nearby school teacher, Sudha got a job as a school attendant and managed to complete her SSLC in 2013. Her job is now secure and she lives in a rented house. She is angry that she had to face such violence in her in-laws home and angry that her husband subjected her to such torture. She is keen to educate her daughters and wants to ensure that they are financially independent. She believes that her daughters should have the rights to decide when and whom they want to marry.

Manjula works in a garment factory and is a single parent to her son and daughter. Married to an alcoholic husband at the age of 14, she bore the brunt of his alcoholism each night as he got home drunk and verbally and sexually abused her. With two young children to take care and no suitable qualification, she had very few choices. In 2000, a neighbour took her to a garment factory and got her a job. Since then she has not looked back. She moved out of her husband's home and stays on her own with her two children. She says she has had enough and cannot tolerate indignities anymore. She wants her children to study as much as they want and wants them to have better choices than what she had in life.

Forced child marriages severely impact not only the girl or woman in question but also families, children and communities. Teenage pregnancies ravage and destroy the body and result in general weakness and anemia. According to the International Center for Research on Women (ICRW), 47% of young girls are married before the age of 18. Pregnancy is the leading cause of death for girls 15-19 globally. The problem runs deep, as there are social pressures from caste and community groups. Child marriage is a product of entrenched structural violence and it is essential for the government to take steps to educate communities where these practices prevail.

The International Day of Action for Women's Health is important in a country like India to raise public awareness of women's health, reproductive rights and the need to tackle structural gender violence. Significantly the theme, "Our Health, Our Rights, Our Lives! End Violence Against Women in ALL its Forms" is apt for India as it clarifies the connection between health, basic rights, gender violence and its relation to women's lives. For women like Bhagya, Sudha and Manjula who have faced structural violence in the institution of marriage and family, this day and its theme will have no meaning until and unless our government recognizes the absolute importance of gender equality and justice. As a nation, we cannot progress until gender issues are seen as a significant part of the larger discourse of economic and human development. Systemic and structural violence against women has no place in developmental discourses and this needs a radical change in India.

It is crucial for the central and state governments to work in tandem to prioritize women's health and overall empowerment. Women-focused programs are essential to enable women to make strategic choices on key issues like livelihood, marriage, reproduction and health. Whatever the solution be, whether in the form of large-scale public awareness and education campaigns or more stringent legislations against child marriage; it should be targeted at rooting out gender violence faced by women in India.

International Day of Action for Women's Health
Many women can never say 'no' to sex, or decide when sexual intercourse should take place. Unwittingly, women get roped into the surreptitious world of sexually transmitted diseases.
READ MORE