Written by Madhumathi Palaniappan
Medically Reviewed by The Medindia Medical Review Team on November 9, 2016 at 9:54 AM 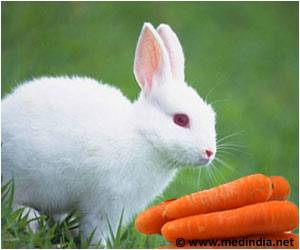 The Ministry of Health and Family Welfare has recently banned the use of Draize irritation test that is performed on rabbits.

The decisions are made after a series of representations from Humane Society International and India's campaign to control cruel animal drug testing.

Indian Health Ministry Bans Repeat Animal Testing for Drugs
The Human Society International (HSI) and People for Animal (PFA) lauded the historic decision for the move that could save thousands of animals.
Advertisement
‘Non-animal alternatives as per the Organization for Economic Cooperation and Development Guidelines can be used for the initial testing of cosmetics.’

According to the revised notification in the Drugs and Cosmetics Rules, 1945 related to animal toxicology, the initial study on toxicity can be carried out using non-animal alternatives as given under the Organization for Economic Cooperation and Development Guidelines. This rule holds good even for eye toxicity.


The Draize test is used for more than 70 years to measure eye and skin irritation in rabbits which are caused due to cosmetics.

The cosmetic or the chemical substance is applied to one eye or onto the shaved skin of the animal's back. The animals are monitored up to 2 weeks, for any chemical damage which may lead to swelling, ulceration, bleeding or blindness. This test is not reliable for use in humans.

The notification authorized the use of Organization for Economic Cooperation and Development (OECD) non-animal alternatives for animal testing.

Alokparna Sengupta, Deputy director of HSI/India said, "This is a historic decision by the health ministry. Thousands of rabbits will now be spared from one of the most cruel and infamous experiments on rabbits known to mankind."

"This, in addition to the cosmetic testing ban passed in India in 2014, will provide the much-needed impetus for India to move towards more humane and advanced 21st century science. We laud the Health Ministry for acting swiftly to notify the rule change and hope that the companies follow this in letter and spirit." he added.

The Drug Testing Advisory Board has also issued a two year phase out period for the Draize test during which non animal alternatives can be used instead of rabbits for the initial testing of cosmetics.

Drugs Banned in India
Several drugs are either banned or withdrawn after introduction in the market.