Immune Cells to Heal Diabetic Ulcers and Other Skin Injuries

Written by Chrisy Ngilneii
Medically Reviewed by The Medindia Medical Review Team on October 26, 2017 at 3:28 PM 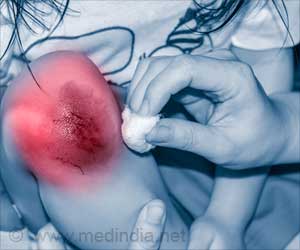 Using Immune Cells to Heal Wounds
Application of mature B lymphocytes, which are the immune cells best known for producing antibodies, greatly accelerates the healing of acute and chronic wounds in both diabetic and non-diabetic mice. The treatment also improves the quality of regenerated tissue and reduce scarring.

"Our demonstration that B lymphocytes - immune system cells that are abundant in the blood - can accelerate wound healing in both healthy and diabetic skin potentially opens up an exciting path to a new treatment for chronic wounds, such as diabetic foot ulcers," says Ruxandra Sîrbulescu, Ph.D., of the MGH-VIC, lead and corresponding author of the report. "Diabetic foot ulcers are the most common cause of non-traumatic major amputations around the world and the costliest type of chronic wound to care for, so an inexpensive and safe way to accelerate healing would have great benefits."

Type 1 Diabetes in Children
Type 1 diabetes is a condition most common in children in which the pancreas stops producing and releasing the hormone insulin that controls blood sugar levels.
Advertisement
‘Mature B cells accelerate wound healing and improve the quality of tissue repair in diabetic and non-diabetic wounds.’

Patients with diabetes are at risk of developing chronic wounds, particularly foot ulcers, because of two complications of the illness. Neuropathy damages the nerves in the skin, particularly the hands and feet, causing a loss of sensation that can lead to repeat injuries of the same structures. Vascular disease limits blood flow to the skin and adjacent tissues, cutting off the supply of oxygen and nutrients required for healthy tissue healing. Between 19 and 34 percent of patients with diabetes develop chronic foot ulcers, the presence of which significantly increases their risk of death compared with patients without foot ulcers.


Four Phases of Wound Healing
Healthy wound healing has four phases: blood clotting to stop bleeding, inflammation to remove dead and damaged cells, proliferation of new tissue and the remodeling of tissues to be stronger and better organized. It is believed that chronic wounds get stuck in an inflammatory phase, with a low-oxygen microenvironment and the persistent presence of enzymes that break down tissue proteins. Recent studies from the VIC and other centers have identified several unsuspected roles for B lymphocytes, including the secretion of powerful anti-inflammatory molecules. A previous study from members of the MGH team, in collaboration with scientists at the St Joseph's Translational Research Institute, found that injecting B cells into cardiac tissue damaged by a heart attack improved structural and functional recovery in an animal model.

Type 2 Diabetes
Globalization and changing lifestyles has made diabetes very common in developing countries so much so that India is known as the Diabetes Capital of the World.
Advertisement
Wound healing for the diabetic and non-diabetic
For the current study, the team first isolated mature B cells from the spleens of diabetic and non-diabetic mice. Their series of experiments showed that a single application of concentrated, mature B cells accelerated wound healing and improved the quality of tissue repair in both animal models. B cell treatment also quickly reduced the size and improved the healing of chronic skin ulcers in the diabetic mice, increasing the number of both nerve endings and blood vessels in regenerated tissue.

Remarkably, the same healing effect was produced when B cells from older obese diabetic mice were applied to acute wounds in similarly aged, obese diabetic mice. Both groups of animals were equivalent to 55- to 60-year-old morbidly obese patients with uncontrolled diabetes, the most difficult population to treat. The sort of mature B cells used in this study have a limited life span, and once applied on a wound, they remained active at the site for up to 14 days. This makes them easier to control than other types of cells used in therapies and makes side effects unlikely. Overall, the presence of B lymphocytes was associated with increased tissue proliferation, reduced cell death and a more supportive environment for wound healing.

Sîrbulescu notes that it is possible to isolate high numbers of a patient's B cells through a standard blood pheresis procedure, allowing collection of enough cells for several treatments at a single session. The team has been working with colleagues at Dana-Farber Cancer Institute to develop protocols to create the type of enriched B cell preparation that could be used to treat patients. "While more work is required to elucidate the cellular and molecular mechanisms through which B cells exert their beneficial function in wound healing, we are in the process of obtaining the required regulatory approvals to conduct a first clinical study in patients with diabetic foot ulcers. With adequate funding, we believe we could apply this technology clinically within one to two years" she says. The team is working in collaboration with study co-author Dennis Orgill, MD, Ph.D., of the Wound Care Center in the Plastic Surgery Division at Brigham and Women's Hospital to set up a clinical study in patients with diabetic foot ulcers.

Mark Poznansky, MD, Ph.D., director of the MGH-VIC and senior author of the Wound Repair and Regeneration report adds, "Having a novel therapeutic that is based on the immediate isolation of a patient's own cells, with minimal manipulation, will represent an attractive option for the wound care field; and a successful option that accelerates healing would greatly benefit patients, as diabetic ulcers typically need up to a year or more heal. Further development of the B cell application therapy may lead to novel ways of addressing the pathologies underlying the formation of chronic wounds."

Diabetes and Dental Health
The oral health preventive strategies in individuals at risk for diabetes are important because they play a key role in oral diseases that affect dental care.

Scleroderma
News Archive
News Resource
News Category
Juul E-Cigarettes Banned from US Market Busy Americans Get The Least Sleep At 40 Years Deepika Padukone Rushed To Hospital After Sudden Chest Pain Vegans, Vegetarians and Fish Eaters Have Better Memory Than Meat Eaters How to Reduce the Risk of Acute Kidney Injury By Drinking Coffee?
More News
Sign up for Wellness Consult a Doctor Sign up for Selfcare