Human Brain Tissue is Successfully Grown in a Petri Dish

Written by Madhumathi Palaniappan
Medically Reviewed by The Medindia Medical Review Team on April 17, 2017 at 5:17 PM 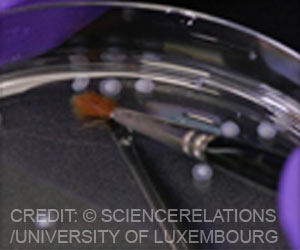 The human brain is the most complex organ in the human anatomy which makes it extremely difficult to do scientific experiments that help in understanding neurodegenerative diseases like Parkinson's disease.

A research team from the Luxembourg Center for Systems Biomedicine (LCSB) of the University of Luxembourg have recently succeeded in turning the human stem cells that are derived from the skin samples into tiny, three-dimensional brain-like cultures which is very similar to the cells in the human midbrain.

Different kinds of cells are allowed to develop in the petri dishes. This may exchange signals and produce products that are typical of an active brain.

"We can now use them to study the causes of Parkinson's disease and how it could possibly be effectively treated."

More People Should Donate Their Brains
Scientists are appealing for more people to donate their brains for research after they die, a media report said on Friday.
Advertisement
The results of the study are published in the scientific journal Stem Cell Reports.

Human Midbrain - A Target for Scientists
The human midbrain can be of particular interest because:

It is the seat of tissue structure (Substantia nigra). Here, nerve cells are capable of producing dopaminergic neurons which produce dopamine. This is essential for maintaining the smooth body movements.

If the neurons die, then the person may develop tremors or muscle rigidity, which are some of the common symptoms of Parkinson's disease.

Since cells cannot be taken directly from the substantia nigra for studies. Scientists around the world are continuously trying to cultivate three-dimensional structures of the midbrain in the Petri-dishes.

Converting Stem Cells into Brain Cells
Some induced pluripotent stem cells were used by the scientists from the LCSB. The procedure for converting the stem cells into the brain cells was developed by Anna Monzel.

Monzel described her procedure, "I had to develop a special, precisely defined cocktail of growth factors and a certain treatment method for the stem cells, so that they would differentiate in the desired direction."

An extensive preparatory work that had been done by Schwamborn's team was studied for some years ago. These pluripotent stem cells in the petri dish may multiply and spread out to form a three-dimensional supporting structure that produces tissue-like cell cultures.

Jens Schwamborn, said, "Our subsequent examination of these artificial tissue samples revealed that various cell types characteristic of the midbrain had developed."

"The cells can transmit and process signals. We were even able to detect dopaminergic cells - just like in the midbrain."

These facts made it interesting for the Parkinson's researchers.

Schwamborn stressed that, "On our new cell cultures, we can study the mechanisms that lead to Parkinson's much better than was ever the case before. We can test what effects environmental impacts such as pollutants have on the onset of the disease, whether there are new active agents that could possibly relieve the symptoms of Parkinson's - or whether the disease could even be cured from its very cause. We will be performing such investigations next."

Benefits of Developing Brain-like Tissue Cultures
Jens Schwamborn also explained that "The production of tissue cultures is highly elaborate. In the scope of our spin-off Braingineering Technologies Sarl, we will be developing technologies by which we can provide the cultures for a fee to other labs or the pharmaceutical industry for their research."

Personalized Approach to Understanding and Treating Brain Disorders
Studying brain disorders in people and developing drugs to treat them has been slowed by the inability to investigate single living cells from adult patients.