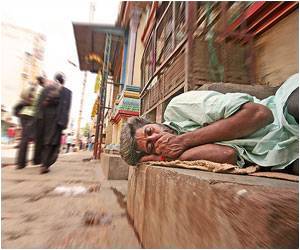 Mortality rates are higher in the homeless population, Danish researchers reveal. Homeless people have higher death rates and a much lower life expectancy than other people. In terms of a public health prospective, the homeless constitute a high-risk population.

Now these statistics belong to Denmark, a developed country ranked as having the world's highest level of income equality. Imagine the results that a similar study in India would produce. Despite being hailed as an engine of growth and instrument of globalization, our country is home to lakhs of homeless! The 2001 census had registered a total urban homeless population of 7, 78,599 people.

The current study is not devoid of flaws. Homeless people are a transient population and, because of their insufficient accommodation, are difficult to sample and monitor, the authors agree. The term 'homeless' used in the study covered people 'who either are living in or have a history of staying in a homeless shelter during the study period.' So this definitely means that people who were 'transiently homeless' should have made into the study. The study did not include homeless people who avoided shelters.

"This study underlines that this marginalized population needs more attention on the health agenda," the study authors concluded.

Head Count of the Homeless: India Facing Demands for Action
India's homeless are being counted as part of the country's mammoth 10-yearly census in an exercise that could help shape future housing policy in the fast-growing economy.
READ MORE