A recent advancement in HIV Vaccine design has been made by a research team from The Scripps Research Institute (TSRI). The structure of a protein on an HIV's surface called the envelope glycoprotein on previous studies at TSRI has been used to design a mimic of the viral protein from an HIV subtype C, that is responsible for many infections.

The immunogen that has been identified could be combined with a vaccine to combat different strains of HIV.
HIV Vaccine Design: Immunogen Identified to Combat Different HIV Strains


Ian Wilson, Hanson Professor of Structural Biology and chair of the Department of Integrative Structural and Computational Biology at TSRI, said, "All of this research is going toward finding combinations of immunogens to aid in protecting people against HIV infection."


‘Immunogen identified could be combined with a vaccine to combat different HIV strains.’


The research study published in the journal Immunity alongside another study at Karolinska Institute in Stockholm showed that the new vaccine candidate developed could elicit neutralizing antibodies in non-human primates.

The studies were able to show how structure-based immunogen design can advance vaccine development.

Effective HIV Vaccine
Human immunodeficiency virus (HIV) infections are of various types. The mutations were found to occur rapidly. Out of the different strains that cause HIV infections, the research team tends to focus on common threats like Clades A, B and C.

An effective HIV vaccine is needed to protect against multiple strains. The research team is designing a set of immunogens so that the immune systems can work against the antigen.

The research team led by Wilson and TSRI Associate Professor Andrew Ward in 2013, has determined the structure of Clade A envelope glycoprotein. This could recognize host cells and contains the machinery that HIV uses to fuse with cells. As this is the only effective antibody target and an effective HIV vaccine must trigger the body to produce the antibodies that neutralize the virus by blocking the activities.

Javier Guenaga, an IAVI collaborator working at TSRI, said, "Clade C is the most common subtype of HIV in sub-Saharan Africa and India."

"Clade C HIV strains are responsible for the majority of infections worldwide."

Clade C glycoprotein
The Clade C HIV strain that is responsible for infections is unstable, and the molecules are capable of falling apart.

Guenaga required the molecules to stay together as a trimer so that Fernando Garces would get a clear image of the clade C glycoprotein's trimeric structure.

In order to solve the problem, scientists re-engineered the glycoprotein and strengthened the interactions between the molecules to get a soluble molecule that would assemble as it is on the viral surface.

Garces said, "Despite all the engineering employed to produce a stable clade C protein, these crystals (of clade C protein) were grown in very challenging conditions at 4 degrees Celsius and it took the diffraction of multiple crystals to generate a complete dataset, as they showed high sensitivity to radiation damage."

"Altogether, this highlights the tremendous effort made by the team in order to make available the molecular architecture of this very important immunogen."

Promising Vaccine Candidate
Based on the research findings, the research team tested an immunogen that was engineered to appear on the large molecule called a liposome that could create a mimic of the virus.

The newly designed vaccine candidate could prompt the immune system to produce antibodies that are capable of neutralizing Clade C HIV strain when tested in non-human primates.

Guenaga said, "That was great to see."

"This study showed that the immunogens we made are not artificial molecules--these are actually relevant for protecting against HIV in the real world."

Harnessing Antibody Evolution on the Path to Developing an AIDS Vaccine
A potential vaccination strategy to jump-start the selection and evolution of broadly effective antibodies to prevent HIV infection has been described by researchers.
READ MORE 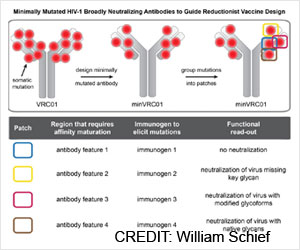 Broadly Neutralizing HIV Antibodies Engineered to be Better Vaccine Leads
Broadly neutralizing antibodies are rare, unusual antibodies that result from continuous mutational adaptation driven by the evolution of HIV in the body over time.
READ MORE 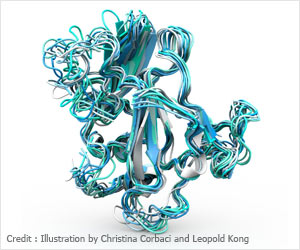