Non-O blood group people are associated with a higher risk of heart attack finds a recent study presented at the Heart Failure 2017 and the 4th World Congress on Acute Heart Failure.

A heart attack causes a sudden loss of blood supply to the heart muscle. It is the leading cause of death for both men and women.
Heart Attack Risk Found to be Higher Among Non-O Blood Groups


Around one in four people in the U.S die due to a heart disease every year. Smoking, high blood pressure and high cholesterol levels are some of the risk factors of a heart attack.


‘High risk of heart attack is associated with people who have a non-O blood group.’


Tessa Kole, master's degree at the University Medical Centre, Groningen, Netherlands, said, "It has been suggested that people with non-O blood groups (A, B, AB) are at higher risk for heart attacks and overall cardiovascular mortality, but this suggestion comes from case-control studies which have a low level of evidence. If this was confirmed it could have important implications for personalized medicine."

Research Study
The study was based on a meta-analysis of prospective studies that reported on the different blood groups and cardiovascular events such as myocardial infarction, coronary heart disease, heart failure, and cardiovascular mortality.

The odd ratio (OR) for all the coronary events were higher in carriers of a non-O blood group significantly.

However, in fatal coronary events, there were no significant differences between people with O and non-O blood groups.

Ms. Kole said, "More research is needed to identify the cause of the apparent increased cardiovascular risk in people with a non-O blood group. Obtaining more information about risk in each non-O blood group (A, B, and AB) might provide further explanations of the causes."

She even concluded that "In future, blood group should be considered in risk assessment for cardiovascular prevention, together with cholesterol, age, sex and systolic blood pressure. It could be that people with an A blood group should have a lower treatment threshold for dyslipidemia or hypertension, for example. We need further studies to validate if the excess cardiovascular risk in non-O blood group carriers may be amenable to treatment." 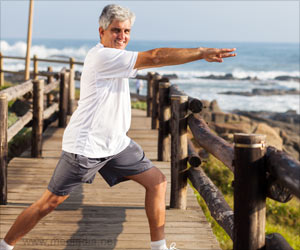 Exercise Could Enhance Heart Attack Survival
A recent study from the European Society of Cardiology found exercise to be associated with improvement in heart attack survival.
READ MORE

Shape of Blood Flow in Heart may Help Predict Stroke Risk
More than 1.6 million Americans each year are diagnosed with symptoms of atrial fibrillation that put them at risk for strokes.
READ MORE