New Ray of Hope For Kidney Transplantation Patients With Hepatitis C - Liver diseases secondary to hepatitis C virus (HCV) infection are an important cause of mortality and morbidity in kidney transplant recipients and dialysis patients. 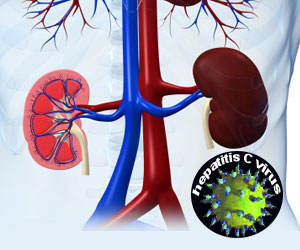 As a policy, most countries ban the use of kidneys from donors who appear sero-positive for HCV because hepatitis C virus (HCV) infection is transmissible through organ donation. However, considering the present scenario of an imbalance in the demand and supply, where need for transplantation greatly exceeds the supply of donated kidneys, the current thought seems to be towards accepting such donors for HCV postive recipients.

For the past several years, researchers from Spain have been transplanting kidneys from HCV-sero-positive donors into HCV-sero-positive recipients. Now the analysis of the results of such transplants indicates that this controversial practice can be given a green signal under some circumstances. Overall this shift would take care of some of the shortage of Kidneys.

Dr. Jose Morales, Associate Professor of Medicine in the Renal Transplant Unit, University Hospital, Madrid, discovered in the early years of this study that the viral load increased after transplantation in four out of five HCV-sero-positive recipients who did not otherwise havean active infection prior to receiving a kidney transplant from an HCV-sero-positive donor (viral load <100 copies per ml of HCV RNA). After the year 1993, Dr. Morales and team limited the use of kidneys from sero-positve donors to recipients with an active HCV infection at the time of transplantation and it showed positive and improved results.

Corresponding author of the study, Dr. Jose confirms that, "It is possible to transplant kidneys from HCV-sero-positive donors into HCV-RNA-positive recipients safely without many compilations".

Looking at the results he says that, "Long-term patient survival, graft survival and rates of liver disease are favorable and similar to those obtained with transplantation using kidneys from HCV-seronegative donors".

In countries where HCV rates are endemically very high and several patients awaiting transplantation are HCV-sero-positive, this research can have positive and important implications. Looking at the positive side of it, Dr. Morales comments, "This way, more organs could be made available for transplantation purposes".

Dr. Morales and his colleagues consider this strategy to be ethically acceptable provided sufficient information is provided to the potential recipient while obtaining their consent for the prodedure and they are made aware of all the pros and cons. The researchers also recommend further prospective studies to investigate the influence of donor HCV viral load on transplantation outcomes. This should also be determined whether donor and recipient HCV genotype matching would avoid potential HCV super-infection.

Comments should be on the topic and should not be abusive. The editorial team reserves the right to review and moderate the comments posted on the site.
maikol

I will sell a live donor kidney, age 24 floor man's, not what serious diseases was not ill, not hepatitises not Ð²Ð¸Ñ aren't present infections, the kidney in full health of bad habits isn't present, except smoking of cigarets, narcotics I do not use, a blood type 2 , the request to intermediaries not to disturb I work only on a straight line with the buyer, all expenses on moving and other for the buyer. Offers to direct: 4ybak666@bk.ru Date of filling 14.03.2011

Have an STD? you are not alone.Find others with same STD at site named http://www.STDmatching.com. you may be upset and think your sex life is over. However, once you settle down and learn the facts, you'll realize that having STD is not the end of the world, and it's not the end of your social life.

Kidney transplantation is the transfer of a healthy kidney from one individual (donor) to another (recipient) through a specialized surgery.

How healthy are your kidneys? Is it possible to lead healthy lives with just a single kidney? Learn more by taking part in this ...

How to Prevent Hepatitis C Virus After a Liver Transplant

Liver failure or liver cancer caused by liver cell infection with hepatitis C virus (HCV) happen to be the most common causes that require liver transplantation.

Acute renal failure is the sudden cessation of the functioning of kidneys, that can be due to reduced renal blood flow, damage to renal tissues.

Ask people who have suffered from urinary stones and they will tell you how excruciating the pain can be!

There is a wide misconception that only adults develop stones. On the contrary kidney stones are very common in children living in hot climates.

Bacterial infection of urinary bladder can cause pain and burning sensation while passing urine. Abnormal Vesico-ureteric reflex, due to which the urine goes back to the kidneys from the bladder is also known to cause infection.