A diet abundant in whole-grain cereals, vegetables and fruits has health promoting effects, which the nutritionists believe to be due to many factors, such as phytochemicals or fiber-polyphenolic complexes, working together. On the other hand, a Western-type diet includes foods such as French fries, processed red meats, high-fat dairy products and refined grains and sweets that contain high amounts of saturated fat, cholesterol and protein or easily absorbable carbohydrates. This dietary pattern leads to lifestyle diseases such as type-2 diabetes, cardiovascular disease (CVD), cancers or even osteoporosis. 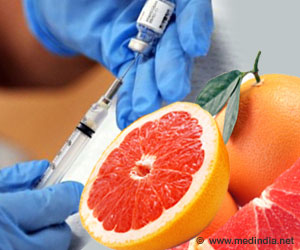 A Western-type diet, of course, does no good to the gut health because of lack or limited dietary fiber. So, dietary supplements are used to increase the dietary fiber in such type of diets.

Inulin is a natural fiber found in numerous fruits and vegetables. Although it is not digested in the upper gastrointestinal tract, it is easily fermented by the gut bacteria in the colon. This fermentation leads to fecal biomass and water content of stools, thus improving bowel movements. Studies have shown that inulin has a prebiotic effect as they stimulate the growth of bifidobacteria in colon thereby protecting the colon from infection, lowering the intestinal pH (lower pH is beneficial for gut health), assisting in digestion and absorption and also stimulating the immune response.

Earlier research by the investigators of this study indicated that supplementation of standard diet with grapefruit flavonoids increased the intestinal pH and also decreased the activity of certain microbial enzymes (which is not good). However, adding inulin to the flavonoid decreased the pH in the hindgut, increased the microbial activity and normalized the water content of digested mass.

So, this time, the researchers, Adam Jurgonski and colleagues from the Institute of Animal Reproduction and Food Research, Polish Academy of Sciences, Poland, examined whether grapefruit flavonoid extract and inulin combo in a Western-type diet may provide synergistic effects to hindgut metabolism, as well as blood lipid and mineral profiles.

Forty male Wistar rats were distributed into 4 groups and fed for 28 days with diets rich in fat, cholesterol and protein. The control diet (C) contained 5 percent of sucrose. The inulin diet (IN) had 5 percent of inulin preparation.

The results showed that -

 The 0.3 percent grapefruit flavonoid extract (GFE) diet caused a considerable enlargement of the hindgut tissue and digestion. The hindgut microorganisms were not able to sufficiently metabolize the flavonoid glycosides of GFE.

 An increased and a non-constipated stool output was observed with GFE feeding.

 The GFE diet group showed a decreased concentration of ammonia, iso-butyric acid, valeric acid and iso-valeric acid. The decreased ammonia concentration is considered a positive change because this compound can destroy cells, alter nucleic acid synthesis, induce cancerous cell growth and increase viral infections at concentrations in the lower bowel of usual Western diets, according to the researchers.

 IN + GFE diet slightly decreased the pH value and increased the bifidobacteria number and the propionate concentration, however to the level observed with the control sucrose-containing diet.

 The serum cholesterol concentration was similar among all dietary groups; however, the serum triglyceride concentration decreased significantly in the GFE group regardless of the dietary carbohydrate type.

The researchers concluded that 'Inulin does not provide any additional benefit to the blood lipid profile caused by dietary application of the grapefruit flavonoid extract and it does not counteract clearly detrimental effects of the extract in the hindgut'.

They also cautioned that adding grapefruit extract to the diet could cause possible adverse hindgut responses with overdoses.

A high fiber diet and good water intake are essential for a stress free body. High-fiber foods prevent overeating and is also the key to maintaining a healthy weight.

Grapefruit That Won't Interfere With Medicine

University of Florida researchers are developing a hybrid grapefruit that would not interfere with the working of medicines.

Your Gut Bacteria Type Depends on The Food You Eat

What you eat may help determine what type of bugs thrive in your intestine, a new study has suggested.