Get Immunized This Measles Immunization Day

The Measles Immunization Day observed on the 16th of March every year helps create awareness about measles and ways to fight it.

Measles also referred to as morbilli or rubeola or red measles is a highly infective viral disease which mainly affects children and spreads very easily. A WHO report from 2018 highlights that there has been an increase in the number of measles cases reported in the U.S, the Eastern Mediterranean region, and Europe.
Get Immunized This Measles Immunization Day

Very recently in February 2019, almost 70 people, mostly children below 4 years, were found dead because of measles. India has been identified as one of the nations with the highest measles incidence rate per million with 66794 cases reported between 2017 and 2018, according to WHO. Gaps in vaccination coverage and hesitancy in getting children vaccinated seem to major hurdles in tackling the deadly disease.


‘The Measles Immunization Day aims to promote the use of and create awareness about the measles vaccine, as measles is one of the leading causes of death and disability in children.’
Read More..

Immunization is considered one of the most successful and cost-effective health interventions that could potentially save millions of lives around the world. A mass measles vaccination campaign in India between 2010 and 2013 saved the lives of thousands of children.

The Indian Government started the Measles-Rubella (MR) Campaign which targets children and adolescents up to the age of 15 years, aiming to control rubella and eliminate measles by 2020. The measles vaccine in India is given in two doses, once at 9-12 months of age and again at 16-24 months of age.

MMR Vaccine - Who needs it?

Measles-Mumps-Rubella vaccine (MMR vaccine) has to be administered to children up to 6 years in 2 doses, to those adults who do not have immunity, international travelers and healthcare professional who show no trace of immunity.

The vaccine is not recommended for pregnant women, people with severe allergies and those with weak immune systems.

The WHO celebrates the World Immunization Week every year in the last week of April. It aims to promote the use of vaccines to protect people from deadly diseases like measles. Despite the success of various immunizations campaigns around the world, nearly 20 million children remain unvaccinated. Various stakeholders like the parents, community members, healthcare workers and medical professional are responsible for the success of campaigns.

Immunization is fundamental in achieving positive health outcomes and the campaigns have to be particularly intensive in the poor, marginalized and conflict-affected parts of the world. 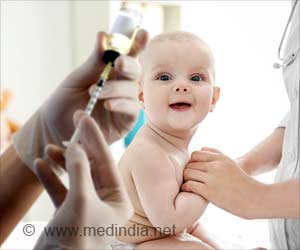 Measles Cases Spike Globally: WHO
Measles cases in the year 2017 upsurges in the U. S, the Eastern Mediterranean region, and Europe with an estimated 1,10,000 deaths related to the disease.
READ MORE

Vaccines for Children
A number of vaccines are now available to protect children from various diseases.
READ MORE