Gene Response Differs With the Amount and Rate of Insulin Secretion

Written by Dr. Meenakshy Varier
Medically Reviewed by The Medindia Medical Review Team on November 23, 2016 at 11:07 AM 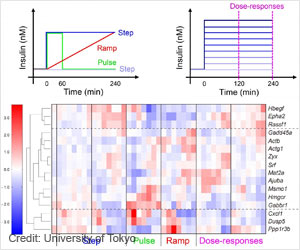 Japanese researchers have found that genes respond differently to the amount and rate of secretions of insulin.

Optimal Management of Basal-bolus Insulin Regimen
The main objective of going on a basal-bolus insulin regimen is to keep the blood sugar range as healthy as possible.
Advertisement
‘New therapies can be developed using drugs whose release rate can be controlled to effectively treat diseases like type 2 diabetes.’

Insulin plays an important role in lowering glucose to regulate blood sugar. Malfunction of insulin hormone can lead to obesity and diabetes.


The body sustains low-dose levels of insulin at all times, while secretions spike temporarily after meals, creating wavelike fluctuations in the amount of insulin that is secreted and circulating in the bloodstream.

Subcutaneous Fat Has an Intrinsic Circadian Rhythm in Insulin Sensitivity
Insulin sensitivity reached its maximum around noon, and was more than 50% higher than at midnight.
Advertisement
The hormone is also involved in metabolism and other cellular and biological processes by regulating gene expression.

But the mechanism by which the amount and temporal patterns of insulin secretions, control the manifestation or repression of genes was not clear.

They worked with cultured cells derived from malignant tumors in rat livers, called FAO cells, that were injected with insulin and used RNA sequencing to measure gene expression.

The scientists found that 278 genes responded to insulin, referring to them as insulin-responsive genes, or IRGs.

From these, they identified over 50 genes that are involved in important processes, such as cell metabolism, cell growth, and cell division.

Further experimental analyses and mathematical modeling revealed that the genes responded differently to variations in insulin levels and temporal patterns.

"The method we used can be applied to all biological phenomena for which wavelike patterns representing temporal changes can be obtained," says Kuroda.

One of the potential uses of this approach is to design therapies using drugs whose release rate can be controlled to effectively treat diseases like type 2 diabetes.

Weaver Syndrome
News Archive
News Resource
Advertisement
News Category
Milestone In Voluntary Blood Donation Achieved Samsung Reinvents Toilet for the Poor Which is a Better Form of Exercise: Daily or Weekly? First Phase of Foot-and-Mouth Disease Vaccination Shocking News: Polio Cases Return After a Decade in the US
More News
Sign up for Wellness Consult a Doctor Sign up for Selfcare

Accident and Trauma Care Find a Doctor Post-Nasal Drip Blood Pressure Calculator The Essence of Yoga Vent Forte (Theophylline) Selfie Addiction Calculator Blood Donation - Recipients Drug - Food Interactions A-Z Drug Brands in India
This site uses cookies to deliver our services. By using our site, you acknowledge that you have read and understand our Cookie Policy, Privacy Policy, and our Terms of Use