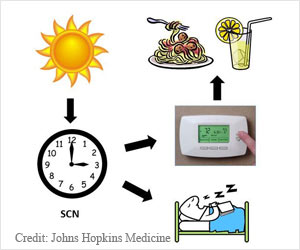 The sleep-wake cycle in the body is controlled by a clump of just a few thousand brain cells, no bigger than a mustard seed. These cells relay light cues about night and day throughout the body.

Researchers from the Johns Hopkins studied the brain region known as suprachiasmatic nucleus (SCN) and they report direct evidence in mice for how those cell clusters control the sleep-wake cycle.

Sleep Deprivation can lead to a Host of Serious Health Problems
Whether you have trouble sleeping or trouble staying asleep, it's important that you address the causes of sleep deprivation and cultivate good sleep habits.
Advertisement
‘An option to treat jet lag would be to briefly block the gene LHX1 so that the suprachiasmatic nucleus cells uncouple and become easier to reset, either by light or temperature. ’

"Light has a strong, negative and direct effect on sleep in humans. We experience this every evening when we turn out the lights before we go to bed and every morning when we open the curtains to let light in. However, very little was known about how this happens. Learning that the SCN is indeed required for light to directly regulate sleep is an important piece of the circadian rhythm puzzle," says Seth Blackshaw, Ph.D., professor of neuroscience at the Johns Hopkins University School of Medicine.


SCN functions as a master clock. It uses light to synchronize body's rhythms with day and night. It directly controls sleep-wake cycle and indirectly controls other process like body's thermostat, hunger and thirst.

Top 10 Ways to Prevent Jet Lag / Desynchronosis
Did you recently shift time zones and feel sleepy during the day? Here are the top 10 ways to handle jet lag like a pro.
Advertisement
But the importance of SCN to light's immediate effect on regulation of sleep was yet to be determined.

"If you surgically removed the SCN in mice, their sleeping and waking were no longer immediately influenced by light, but you can't remove the SCN without also severing the optic nerve that brings light information to it from the retina. So no one knew if this resistance to light was due to the missing SCN or the missing optic nerve," says Blackshaw.

In the new round of experiments, when the scientists deleted LHX1 just from cells that make up the SCN, the circadian rhythms in mice were severely disrupted.

Also the cells of the SCN no longer produced six small signaling proteins known to coordinate and reinforce their efforts, a biochemical process known as coupling.

The sleep pattern, including the time and duration of sleep, of the mice became random after deletion of LHX1. They slept for the same amount of time, about 12 hours each 24-hour period, like normal mice, but without a pattern to the cycle.

"This experiment showed that the SCN is critical to light's immediate effect on sleep," says Blackshaw.

The core body temperature did not fucntion normally in the SCN-impaired mice.

In humans, the average body temperature for humans is 37 degrees Celsius, that fluctuates throughout the day and reaches it peak in the afternoon and lowest just before dawn. A similar pattern occurs in mice.

But cycles in the core body temperature is not generally disturbed by large temperature changes and that explains why fever does not cause a jet-lag.

Experiments in mouse are not sufficient to prove if the SCN was responsible for this resistance to strong temperature changes in living animals.

To test if mice might be able to return to normal temperature cycles if given pulses of heat, researchers injected the mice, kept in dark, with a molecule found in bacterial cell walls, which makes them run a fever.

As suspected, their regular core temperature cycling came back.

"These results suggest that the SCN is indeed responsible for the temperature resistance of circadian rhythms in live animals, and it shows us how important SCN coupling is," says Blackshaw. "It also bolsters the idea that the body's other physiologic cycles, such as hunger and hormone secretion, are synchronized by the SCN through its regulation of core body temperature."

Additional experiments have helped to identify several molecules that may be directing these vital signals and the research team plans to follow up by studying each molecule to determine their roles.

Their study will be published in the journal Current Biology.

New Method Could Soon Be The Cure For Jet Lag
The researchers synthesized the activity of circadian rhythm-changing molecules and targeted a molecule that affects a specific circadian protein called CRY.

Depressive Symptoms Set in When Circadian Clock is Disturbed
Inherent circadian clocks help us function throughout the day, by telling us when to sleep, wake and eat by synchronizing our bodily processes.

Snoring
News Archive
News Resource
Advertisement
News Category
Milestone In Voluntary Blood Donation Achieved Samsung Reinvents Toilet for the Poor Which is a Better Form of Exercise: Daily or Weekly? First Phase of Foot-and-Mouth Disease Vaccination Shocking News: Polio Cases Return After a Decade in the US
More News
Sign up for Wellness Consult a Doctor Sign up for Selfcare