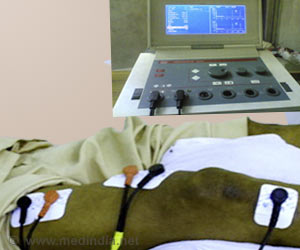 Electromyographic biofeedback therapy can be an inexpensive and valuable adjunct to conventional therapies for enhancing knee extension following ACL reconstruction surgery, according to a study published in the BMC Sports Medicine Arthroscopy Rehabilitation Therapy and Technology journal.

Although anterior cruciate ligament (ACL) injuries that require surgery are common in sports, the continuous increase in such injuries requiring ACL reconstruction because of leisure activities such as snowboarding or roller blading, and work related injuries, makes it a subject of extensive research.

Rehabilitation is one of the most important aspects of ACL reconstruction surgery but it is seen that deficits in knee extension range pose great difficulties for rehab. Electromyographic Biofeedback (EMG BFB) as an adjunct therapy has shown positive results but the studies had shortcomings and required more investigations.


Biofeedback is a treatment technique where the person learns to control certain bodily processes that normally happen involuntarily, for example, heart rate, muscle tension, etc. Electromyographic Biofeedback is one of the most commonly used forms of biofeedback and it is used to measure muscle tension.
Advertisement
This technique was used for the vastus medialis muscle in a controlled trial by Franz Christanell and his colleagues as an add on therapy to investigate whether it could improve the range of knee extension and strength after ACL reconstruction in the early phase of the standard rehabilitation program. Vastus medialis muscle is situated in the medial part of the thigh arising from the femur (thigh bone) and extending into the inner border of the patella (knee cap).

The researchers recruited 16 patients, (12 male and 4 female) aged between 20 and 49 years, from the University Clinic of Innsbruck, Austria. All of them had undergone ACL reconstruction surgery performed by the same surgeon and same surgical protocol. The patients were randomized equally into control group receiving a standard rehabilitation protocol with full postoperative weight-bearing, knee brace (0 degree extension, 90 degree flexion), electrical stimulation, aquatics and proprioceptive training and biofeedback group receiving the same rehab protocol plus electromyographic biofeedback (EMG BFB) during each session for the first six weeks. Each patient attended 16 outpatient physiotherapy sessions following surgery.

The results showed that:

 At 6 weeks, passive knee extension and the HHD Test (handheld dynamometer) for testing muscle strength were significantly better in the EMG BFB group compared to controls.

 Biofeedback therapy showed a positive, but not significant, influence on flexion deficit

Thus, the results indicated the electromyographic biofeedback therapy in the early phase of rehabilitation to be useful in enhancing knee extension after ACL reconstruction. 'EMG BFB therapy could help patients be more aware of correct muscle activity', say the authors.

Build Muscle, Get Stronger Even With Light Weights: Researchers
When less weight are lifted more times it is as effective in building muscle as training with heavy ...