Written by Chrisy Ngilneii
Medically Reviewed by The Medindia Medical Review Team on March 16, 2018 at 5:08 PM 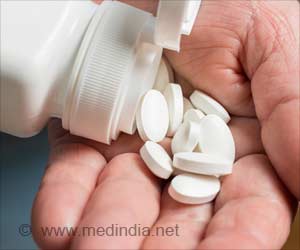 Chondroitin sulfate, a dietary supplement taken to strengthen joints, can speed the growth of a type of melanoma, according to experiments conducted in cell culture and mouse models.

One particular mutation in the B-raf gene (V600E) can be found in about half of melanomas. Jing Chen, Ph.D and colleagues found that chondroitin sulfate can boost growth by melanoma cells carrying the V600E mutation, but not other melanoma cells. Chondroitin sulfate, given to mice with implanted V600E tumors, has a similar effect at levels comparable to those seen in humans when it is used as a dietary supplement. V600E tumors in mice fed with chondroitin sulfate also showed resistance to vemurafenib, a small molecule B-raf inhibitor currently used to treat V600E-positive melanoma patients.

Skin Cancer
Skin cancer is an abnormal growth of skin cells. It can develop due to a continuous exposure to sun over the years.
Advertisement
‘According to this study, a dietary supplement chondroitin-4-sulfate (CHSA), commonly used in osteoarthritis, may promote the growth of tumors in skin cancer.’

Warning to oncologists
While unconfirmed in human epidemiological studies, the findings are a warning to oncologists, and people at an elevated risk of melanoma, regarding potential risks of dietary supplements. Chondroitin sulfate, a structural component of cartilage, is often recommended for the treatment of osteoarthritis, in combination with other compounds such as glucosamine.


It is possible that someone with precancerous lesions containing the V600E mutation, who takes chondroitin sulfate, might accelerate the growth of those cells, or that V600E positive cancer patients taking chondroitin sulfate might have a higher risk of relapse, says Chen, professor of hematology and medical oncology at Winship Cancer Institute of Emory University.

Melanoma
Melanoma is a dangerous form of skin cancer caused largely due to exposure to the sun's damaging UV rays. It commonly arises from new or pre-existing moles.
Advertisement
"We want to be cautious about these results, and they should be followed up," he says. "There is not a lot of hard data on dietary supplement use. We found that we had to add a line to the forms melanoma patients fill out about their histories, since we weren't asking before."

He adds that a large study from the state of Washington showed no link between chondroitin sulfate and prostate or lung cancer risk, although genetic background was not examined.

Working with Chen, instructor Ruiting Lin, Ph.D discovered the effect while evaluating various metabolic enzymes for whether they would be necessary to drive proliferation in mutated B-raf melanoma. Lin observed that the enzyme chondroitin sulfate glucuronyltransferase (CSGlcA-T, or CSG here for short) emerged in her screen. CSG is important for forming the chondroitin sulfate polymer.

While their current paper also identifies CSG as an anticancer drug target, compounds that inhibit the enzyme are not readily available. Inhibitors would need to be tested for potential side effects such as joint pain or the deterioration of connective tissue.

It is possible that CSG may combine with other oncogenes besides B-raf V600E, Chen says. His lab previously showed that a high-fat, low-carbohydrate "ketogenic" diet can also accelerate the growth of V600E melanoma cells.

Squamous Cell Cancer of the Skin
Squamous cell cancer is the second most common type of skin cancer. White-skinned individuals exposed to excessive ultraviolet rays of the sun are commonly affected.

Ultra-Violet Radiation
News Archive
News Resource
Advertisement
News Category
Milestone In Voluntary Blood Donation Achieved Samsung Reinvents Toilet for the Poor Which is a Better Form of Exercise: Daily or Weekly? First Phase of Foot-and-Mouth Disease Vaccination Shocking News: Polio Cases Return After a Decade in the US
More News
Sign up for Wellness Consult a Doctor Sign up for Selfcare