Can Fungi be a Potential Goldmine for New Antibiotics?

Written by Madhumathi Palaniappan
Medically Reviewed by The Medindia Medical Review Team on April 22, 2017 at 5:38 PM 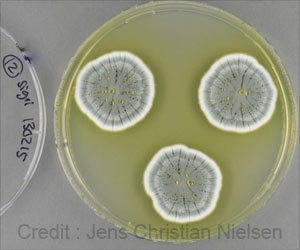 Fungi may be a potential source for producing antibiotics, finds a research team at the Chalmers University of Technology who developed a method to create antibiotics from natural sources.

Antibiotics are drugs obtained from microorganisms and are used to treat bacterial infections. They have the potential to save millions of lives and were discovered in the 1940s. However, resistance may occur when the bacteria produces changes against antibiotics.

Drug Resistance - Antibiotic Resistance
Drug resistance is often a problem in malaria, tuberculosis, HIV, sexually transmitted diseases and hospital acquired diseases. Judicious use of antibiotics can control the problem.
Advertisement
‘Fungi may have enormous potential for the production of novel antibiotics.’

The study findings published in the journal Nature Microbiology may be useful in the battle against antibiotic resistance.


Fungi - Enormous Potential
The first antibiotic which was discovered to treat bacterial infections was Penicillin, obtained from the fungi Penicillium notatum. On the verge of developing new antibiotics, the research team had sequenced the genomes of nine different types of Penicillium species.

Quiz on Antibiotics
Think you know your medicines too well? Test your antibiotic knowledge with this quiz. Get whizzing...
Advertisement
The research findings were amazing:

Jens Christian Nielsen, PhD student at the Department of Biology and Biological Engineering, said, "We found that the fungi have enormous, previously untapped, potential for the production of new antibiotics and other bioactive compounds, such as cancer medicines."

Research Study
The research team scanned the genomes of 24 different kinds of fungi to find the genes responsible for producing a number of bioactive compounds.

The immense potential of fungi in developing a variety of natural and bioactive chemicals can be used for producing new pharmaceuticals.

The scientists were able to predict the chemical products of the pathways in around 90 cases. In accordance to this, they followed the production of an antibiotic called yanuthone. They even identified a new fungi which was able to produce the compound. Some of these species may also produce a new version of the drug.

The fungi not only showed potential in producing new antibiotics but, however, helped to enable more efficient production of the existing ones.

Jens Christian Nielsen, described that "It's important to find new antibiotics in order to give physicians a broad palette of antibiotics, existing ones as well as new ones, to use in treatment. This will make it harder for bacteria to develop resistance."

The author also added that the previous efforts to find new antibiotics were mainly focused on bacteria. Since fungi are difficult to study, we know very little about them. However, they are capable of developing the bioactive substances naturally and may also help to protect themselves and survive in a competitive environment. This is the reason to develop research on fungi.

Further research on comparing hundreds of genes may help in the continuous evaluation of bioactive drugs. However, it is impossible to say on how long it would take to launch the antibiotic drugs in the market.

Jens Christian Nielsen, said, "Governments need to act. The pharmaceutical industry doesn't want to spend money on new antibiotics, it's not lucrative. This is why our governments have to step in and, for instance, support clinical studies. Their support would make it easier to reach the market, especially for smaller companies. This could fuel production."

Potent Antibiotic Identified in Kenyan Ant to Counter Antibiotic-Resistance Microbes
Antibiotic isolated from Kenyan ants has been found to be potent against antibiotic resistant strains like methicillin resistant Staphylococcus aureus.

Shigellosis
News Archive
News Resource
Advertisement
News Category
Milestone In Voluntary Blood Donation Achieved Samsung Reinvents Toilet for the Poor Which is a Better Form of Exercise: Daily or Weekly? First Phase of Foot-and-Mouth Disease Vaccination Shocking News: Polio Cases Return After a Decade in the US
More News
Sign up for Wellness Consult a Doctor Sign up for Selfcare

Can Fungi be a Potential Goldmine for New Antibiotics? Personalised Printable Document (PDF)