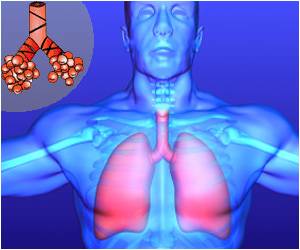 Asthma is a common chronic respiratory condition, characterized, clinically, by an excessive tendency toward airway narrowing and, pathologically, by structural changes in the airway, termed as "airway remodeling".

It is believed that in patients with asthma, the airway narrowing induced by allergen exposure may in itself be a sufficient stimulus in airway remodeling. Christopher Grainge, PhD, of University of Southampton School of Medicine, United Kingdom, and colleagues evaluated airway structural changes in response to the challenges before, and four days after, the challenge protocol. Forty-eight asthma patients underwent three inhalation challenges with a single agent at 48-hour intervals.


The biopsies revealed that dust mite allergen and methacholine produced similar amount of bronchoconstriction, while an eosinophilic airway inflammation occurred only in subjects who received allergen challenge. Nevertheless, both the methacholine and allergen groups had significant airway remodeling as compared to the control groups.

Asthmatic airway remodeling has been attributed to the effects of eosinophilic inflammation. However, this recent study strongly indicates that compressive mechanical forces associated with bronchoconstriction may have an independent effect in promoting remodeling.

The authors reported that, "Since repeated epithelial stress may lead to remodeling, the prevention of bronchoconstriction itself should be an important aim of asthma management. Especially in patients with severe asthma which is not controlled by inhaled glucocorticoids, the addition of "sustained and safe broncho-protection" may help in preventing the long-term effects of airway remodeling".

As a concluding note, authors stated that "This inhaled challenge study supports the hypothesis that bronchoconstriction contributes to asthmatic airway remodeling, independent of the effects of eosinophilic inflammation."

The findings from the study have implications for the better management of asthma as so far airway remodeling has been associated with a decline in lung function and the loss of bronchodilator reversibility.