Blood Test to Predict the Risk of Throat Cancer Recurrence

Written by Dr. Meenakshy Varier
Medically Reviewed by The Medindia Medical Review Team on December 17, 2016 at 11:08 AM 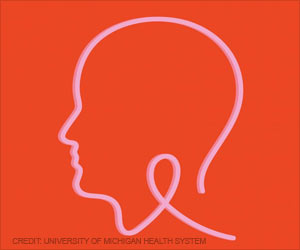 Chances of predicting the recurrence of head and neck cancers at early stage has been made possible by the discovery of two blood-based markers.

Oropharyngeal cancer is a type of head and neck cancer which occurs in the throat, tonsils and back of the tongue or lungs. Most cases of this cancer is caused by the human papilloma virus (ḪPV).

Recurrence Detection Time for Oropharyngeal Cancer Determined
The number of oropharyngeal squamous cell carcinoma (OPSCC) cases linked with human papillomavirus (HPV) has climbed dramatically in the past several decades.
Advertisement
‘Detecting the presence of the blood-based markers to predict the risk of recurrence of oropharyngeal cancer could provide an opportunity for earlier treatment.’

Surgery is the best treatment option for this cancer which can eliminate the disease. Once the cancer spreads to the lungs, targeted therapies might improve outcomes if applied early.


HPV-related cancers are generally more responsive to treatment. But about 15% to 20% of patients, do not respond to treatment.

Protein Produced By HPV Suppresses The Immune Response
A protein known as E7, produced by a high-risk type of human papillomavirus may be the key player in suppressing the body's immune response to the virus.
Advertisement
In most cases of HPV related cancer, the presence of two proteins E6 and E7 are found. Researchers observed that among patients with oropharyngeal cancer, the level of antibodies for these two proteins are higher.

Researchers recruited 52 patients with advanced oropharyngeal cancer. Among them, 22 patients had developed recurrence and 30 had not. All cases were HPV-related.

On an average, recurrence occurred at 13 months after the treatment.

"Most patients recur within the first two years, so the window to catch it is two years after treatment. Everyone's level goes down over time, but some start to go up a little and those are the ones we have to focus on," says study author Matthew E. Spector, M.D., assistant professor of otolaryngology at the University of Michigan Health System.

On observing the levels of E6 and E7 antibodies over time, researchers found that the levels of E7 antibody was not decreasing as quickly in patients whose cancer recurred. The detection was made prior to the point when the recurrence was discovered.

"If we can monitor someone through blood markers, then instead of a patient coming for a clinic visit every two to three months, they could get blood drawn near home. If there's evidence of high E7, we can tell the patient to come in for more evaluation," Spector says.

The level of antibodies varies with people and the absolute level was not an indication.

"It's very patient-specific," Spector says. "Each patient will have different levels, but the question is what happens when you track it over time. If it rises, that suggests recurrence."

It will be inexpensive and easy to implement the test for E6 and E7 antibodies as it is a standard laboratory test that could be performed at any cancer treatment facility. Large scale testing is needed to confirm the findings.

The findings are published in Clinical Cancer Research.

HPV Antibodies Signal Better Prognosis for Head and Neck Cancer Patients
The presence of HPV antibodies in head and neck cancer patients is a good prognostic marker that can be used to determine survival rate.

Undescended Testicles
News Archive
News Resource
News Category
Milestone In Voluntary Blood Donation Achieved Samsung Reinvents Toilet for the Poor Which is a Better Form of Exercise: Daily or Weekly? First Phase of Foot-and-Mouth Disease Vaccination Shocking News: Polio Cases Return After a Decade in the US
More News
Sign up for Wellness Consult a Doctor Sign up for Selfcare