Blood Donation Drops During Holidays When Its Actually Needed Most

Over the summer holidays, 20% of blood donors cancel their appointments, creating a shortfall a time when blood is needed the most, the Red Cross says.

The organisation collects 25,000 litres of blood a week and needs the supply to be consistent, especially with the increased likelihood of road accidents during the Christmas and New Year holidays.
Blood Donation Drops During Holidays When Its Actually Needed Most

One in five people forget or neglect to make their appointments at donation centres during the summer months.


‘Demand for blood exceeds supply all year round. One in three people need blood at any given time but only one in 30 people donate it.’


"We ask the question, would you cancel that appointment if it was your friend or family member who needed that blood donation?" Red Cross spokesman Shaun Inguanzo said.

"At this time of the year, road trauma is a potential threat with many more people out on the roads, but it's not so much the volume of blood that increases, it's the rarity of finding donors," Mr Inguanzo said.

Illustrator Paul Harvey donates to the Red Cross every month and was at his appointment in Melbourne's CBD bright and early this morning to donate platelets, which are used to help cancer patients.

Over 65 minutes his blood is extracted, the platelets removed, and the blood is returned to his body. "The trouble with that for the blood service is that someone in a hospital somewhere is depending on your blood so it is critical that if you've made an appointment to give blood this festive season that you please keep it," Mr Inguanzo said.

While blood and blood products can last 40 days, they are unlikely to be on the shelf for more than eight days. Some products for cancer patients have a shelf life that is even lower. "It's important that we have a constant flow of donors," Mr Inguanzo said. 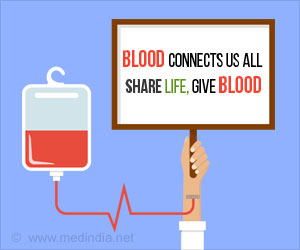