Artificial Beta Cells to Strengthen the War Against Diabetes 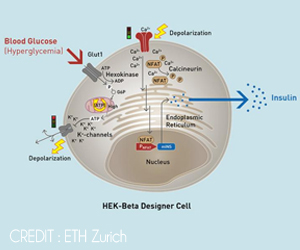 A simple and straightforward approach has been used by the researchers led by ETH Professor Martin Fussenegger at the Department of Biosystems Science and Engineering (D-BSSE) in Basel.

Diabetes
A comprehensive article on diabetes - both Type 1 and Type 2 diabetes, including : causes, signs, symptoms, diagnosis, treatment, facts and a glossary on diabetes.
Advertisement
‘The newly developed artificial beta cells work efficiently and for longer duration compared to any other approach in controlling diabetes.’

Diabetes is a modern-day rampant disease affecting millions worldwide. The International Diabetes Federation estimates that more than 640 million people worldwide will suffer from diabetes by 2040. Half a million people are affected in Switzerland today, with 40,000 of them suffering from type 1 diabetes.


Type 1 diabetes is an autoimmune disease in which the body's immune system acts against its own insulin-producing beta cells in the pancreas and destroys it.

How Turmeric Prevents Type-1 Diabetes Related Heart Failure?
Curcumin in the turmeric has the potential to prevent cardiac hypertrophy and heart failure in type-1 diabetes patients.
Advertisement
This results in the build up of glucose in the blood leading to diabetes. Since blood glucose levels are constantly fluctuating in diabetes, it can lead to serious conditions like hypoglycemia, shock, cardiovascular diseases and renal failure.

The function of artificial beta cells is very similar the natural ones:-
How the Researchers Reprogrammed the Cells

In the previous approaches, researchers used stem cells that were matured into beta cells either by adding growth factors or by incorporating complex genetic networks.

The natural glucose transport proteins and potassium channels in the membrane of the HEK cells, were used and they were enhanced using voltage-dependent calcium channel and a gene for the production of insulin and GLP-1, a hormone involved in the regulation of the blood sugar level.

The HEK cells' natural glucose transport protein carries glucose from the bloodstream into the interior of the artificial beta cells.

Due to the flipping of voltage distribution at the membrane the calcium channels are opened. This causes the calcium to flow in triggering signals within the HEK cells and leading to the production and secretion of insulin or GLP-1.

"They worked better and for longer than any solution achieved anywhere in the world so far," says Fussenegger.

Various rigorous clinical trials should be conducted before the these artificial beta cells hits the market.

Clinical trials of are expensive and often last several years. "If our cells clear all the hurdles, they could reach the market in 10 years," the ETH professor estimates.

The findings are presented in the latest edition of the journal Science.

New Protein Biomarker Found for Diagnosing Type 1 Diabetes
Type 1 diabetes in children can be predicted by the presence of certain blood proteins.

Nutam (400mg) (Piracetam) Drug Side Effects Calculator Drug - Food Interactions Noscaphene (Noscapine) Find a Doctor Diaphragmatic Hernia The Essence of Yoga Blood Donation - Recipients Drug Interaction Checker Pregnancy Confirmation Calculator
This site uses cookies to deliver our services.By using our site, you acknowledge that you have read and understand our Cookie Policy, Privacy Policy, and our Terms of Use  Ok, Got it. Close
×