Written by Dr. Meenakshy Varier
Medically Reviewed by The Medindia Medical Review Team on January 10, 2017 at 11:10 AM 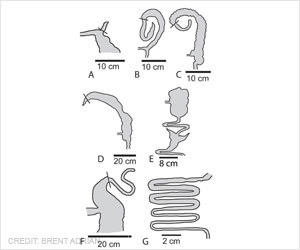 Appendix may serve as a reservoir for beneficial gut bacterial.

The human appendix is a narrow, finger-shaped pouch that extends from the cecum in the digestive system. In some cases it gets inflamed leading to appendicitis which often culminates in surgery.

Appendicitis
Appendicitis is inflammation of the appendix with intense, migrating abdominal pain caused by obstruction due to tumors, feces, or infection.
Advertisement
‘Appendix serves as a reservoir for gut bacteria by increasing the concentration of lymphoid tissue in the cecum, which stimulates the growth of the bacteria.’


Appendicitis is an inflammation of the appendix.

Study: 'Weekend Effect' Following Appendix Removal Operations Is Not Seen Nowadays
In comparison to patients who undergo surgical removal of the appendix on a weekend, those who undergo the same operation on weekdays, experience more postoperative complications.
Advertisement
Appendicitis most often it occurs in people between the ages of 10 and 30 years.

Signs and symptoms of appendicitis may include sudden pain that begins on the right side of the lower abdomen, nausea, vomiting, loss of appetite and low grade fever.

Surgical removal of the appendix or appendicectomy is the standard treatment for this condition.

It is considered a vestigial organ with little or no function. But recent research states that the appendix may serve an important purpose.

In particular, it may serve as a reservoir for helpful gut bacteria.

Several other mammal species also have an appendix, and studying how it evolved and functions in these species may shed light on this mysterious organ in humans.

The international research team gathered data on from 533 mammal specials for the presence or absence of the appendix and other gastrointestinal and environmental traits.

To identify how the appendix changes through mammalian evolution, and to determine why some species have the organ and some don't, they mapped the data onto a phylogeny (genetic tree).

Researchers found that the appendix has evolved independently in several mammal lineages, over 30 separate times.

Once it has appeared, it almost never disappears from a lineage suggesting that it likely serves an adaptive purpose.

They discovered that mammal species with an appendix have higher average concentrations of lymphoid (immune) tissue in the cecum.

This finding suggests that the appendix may play an important role as a secondary immune organ.

Lymphatic tissue can also stimulate growth of some types of beneficial gut bacteria, providing further evidence that the appendix may serve as a "safe house" for helpful gut bacteria.

Animals which had tapering or spiral-shaped cecum had higher chances of having an appendix compared to animals with round or cylindrical cecum.

This suggested that the appendix evolved as part of a larger "cecoappendicular complex" including both the appendix and cecum.

The study is published in Comptes Rendus Palevol.

Pregnant Woman Died After Trainee Surgeons Removed Ovary Instead of Appendix
An inquest has heard that 32-year-old Maria De Jesus in 2011 died after trainee surgeons removed her ovary instead of the appendix.

Women With Appendix or Tonsils Removed Are More Fertile
New research reveals that women who have their tonsils or appendix removed when they are young have improved fertility as compared to the rest of the population.

Tongue Abnormalities
News Archive
News Resource
Advertisement
News Category
Milestone In Voluntary Blood Donation Achieved Samsung Reinvents Toilet for the Poor Which is a Better Form of Exercise: Daily or Weekly? First Phase of Foot-and-Mouth Disease Vaccination Shocking News: Polio Cases Return After a Decade in the US
More News
Sign up for Wellness Consult a Doctor Sign up for Selfcare