Advanced non-small cell lung cancer is one of the most common types of lung cancer. Lung cancer occurs when the cells of the lung become abnormal and begin to grow uncontrollably.


The phase III clinical trial ALEX that was carried among 303 patients, and was published in the journal New England Journal of Medicine.


‘Alectinib drug could be a potential treatment for advanced lung cancer. It can halt lung cancer growth for more than a year when compared to crizotinib.’


The trials results were presented at the American Society for Clinical Oncology (ASCO) Annual Meeting 2017.

Clinical Trials
The study was carried on 303 patients, and the primary endpoint of the study was Progression Free Survival (PFS), the time that a patient could live with a cancer without getting it worse.

The patient, when given alectinib drug, saw a 53% reduction in the risk of progression when compared to crizotinib.

As most of the patients had not yet progressed at the time the data was analyzed, it was difficult to define the PFS values for the arm of the trial.

The median data were available from an independent radiology review committee which showed that the PFS on crizotinib to be 10.4 months when compared to alectinib on 25.7 months.

Around 82.9% of patients with ALK-positive non-small cell lung cancer responded to alectinib when compared to 75.5% responding to crizotinib.

When ALK-positive lung cancer progresses after crizotinib, it may often do so in the brain due to the limited ability to cross the blood-brain barrier in order to target the cancer inside the central nervous system.

The trial actively included patients with brain deposits. Among the patients with measurable lesions at the baseline. The response rate in the brain was found to be 81% with alectinib while only 50% with crizotinib.

The duration of the intracranial response was 17.3 months and 5.5 months respectively. When including patients with and without brain metastases at baseline, there could be an 84% reduction in the risk of CNS progression in patients who took alectinib when compared to those taking crizotinib.

Dr. Ross Camidge, MD, PhD, Joyce Zeff Chair in Lung Cancer Research at the University of Colorado Cancer Center and director of Thoracic Oncology at the CU School of Medicine, said, "We've known the benefits of alectinib given post-crizotinib for a while. Really what we wanted to learn with this study is whether it's best to start treatment with crizotinib and then follow with alectinib as a second-line therapy when the cancer progresses, or whether using alectinib as our first-line therapy could be even better than the sequential approach."

Even though the trial was not clearly explored within the ALEX Trial, previous work has found crizotinib drug followed by alectinib to provide 20 months of cancer control.

The trial also showed that by using Alectinib first-line drug, it could be associated with a median PFS of about 25 months.

Camidge said, "At the point that resistance is manifest - at the point you can see the cancer growing on a scan after initial benefit on, say, crizotinib - that cancer has begun creating more cells and more cells means more diversity. This diversity increases the number of subtypes of the cancer present in an individual, giving the cancer more options to choose from as it evolves in the environment of any new drug. This shortens benefit from the next and the next lines of therapy."

"If you suppress more of it and in more places in the body in the first place, absolute diversity should remain lower, allowing less chance for the cancer to evolve, leading to longer benefit from the treatment."

Comparison with HIV Treatment
The author compared the dynamics with HIV treatment. Moving on from one antiretroviral drug to another could develop resistance. HIV could still be a short and lethal disease. People could start a cocktail of different HIV drugs that could suppress the resistance before it could emerge.

In the current study, it is found that crizotinib drug narrowly targets ALK rearrangement that causes non-small cell lung cancer. While, alectinib targets wider range of changes that could offer resistance.

The resistance mechanism suppressed by alectinib could lead to positive results of ALEX trial and may require additional data to emerge.

Further, research is also being carried out to test other drugs for treating advanced lung cancer.

Camidge said, "Alectinib has proven the principle that going on a broader-spectrum drug first - as long as it's well tolerated - may be a key factor in the long-term control of malignant disease."

Blood Test to Identify Treatment Options for Lung Cancer
Lung Cancer treatment options can be predicted by using blood test since samples obtained from biopsies are too small to reveal clues for treatment.
READ MORE

Alectinib
Alectinib is prescribed for the treatment of a certain type (anaplastic lymphoma kinase (ALK)-positive) of non-small cell lung cancer that has spread to other parts of the body. It belongs to a group of medicines known as kinase Inhibitors ...
READ MORE

Personalized Therapy for Lung Cancer Using Existing Drug
The ATM mutant lung cancer which was considered to be 'undruggable' are now sensitive to a class of recently approved anti-cancer drugs.
READ MORE 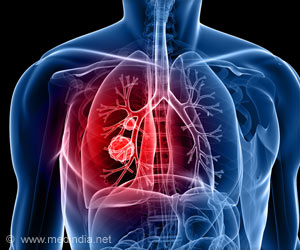