The study was conducted by University Hospitals of Leicester NHS Trust The SWIFFT trial and funded by the National Institute for Health Research. The findings are published in The Lancet .
Wrist Fracture- Plaster Cast Better Than Surgical Fixation


A scaphoid fracture is a break in the wrist's scaphoid bone, which is common in young, active people. It usually occurs by a fall on the outstretched hand or with the hand suddenly being forced backward. Symptoms include pain at the base of the thumb, pain, and swelling of the anatomical snuffbox. If left untreated, it can progress to non-union of bone, avascular necrosis, and arthritis. The scaphoid is one of the eight carpal bones of the wrist. Fracture of the scaphoid bone is often termed by the site of fracture. Scaphoid break mainly occurs in the bone's mid-portion, known as 'waist' .


‘Plaster cast immobilization of wrist with a broken scaphoid provides as good healing as surgery. Plaster cast improves function and reduces pain level, without as many complications in patients, at an affordable price.’
Read More..


Cast immobilization is beneficial for patients as they can avoid the risk of surgery. Hospitals can keep service delivery simple and cost-effective, without compromising patient outcomes.

For the study that ran for a span of three years from 2013 to 2016, 439 adult patients with a scaphoid waist fracture of the wrist were enrolled from orthopedic departments in 31 NHS hospitals across the United Kingdom.

Patients were randomly assigned to two arms of the trial, either to have surgery to hold the broken scaphoid with a special screw, or to have the wrist held still in a plaster cast. In the second case, patients whose fractures did not heal were offered with surgery six weeks later.

One year after the injury, patients were assessed based on multiple factors, including wrist pain and function, bone healing, complications from treatment, and average days of work lost.

After one year, patients in the surgery group had a score of 12, compared to a score of 14 in the plaster group, showing no significant difference in patient-reported outcomes.

There was also no significant difference in the number of fractures that did not heal properly between the two patient groups (2% for the surgical group; 4% for the plaster cast group).

Complications following surgery were higher at 12% compared to the plaster cast group, at 2%.

Professor Joseph Dias, orthopedic surgeon at the University Hospitals of Leicester NHS Trust and Chief Investigator for the SWIFFT trial, said, "This study confirms that putting a wrist with a broken scaphoid in a plaster cast provides as good healing as surgery, so long as the few that do not re-join are identified and fixed by the medical team. Fixing the scaphoid by surgery does not speed up healing, and the time taken to return to work is the same as when a cast is used. Despite a recent rise in surgical procedures to fix scaphoid fractures, there is no evidence that surgery produces better outcomes for patients."

Dias added, "With our research, patients and medical practitioners can be confident that we can treat patients with this fracture safely and effectively in a cast, resorting to surgery only when the bone doesn't heal".

Analysis of the economic factor also revealed that the cost of surgery to the NHS was significantly higher at £2,350, compared with the cost of plaster cast treatment, which was £727 for each patient. 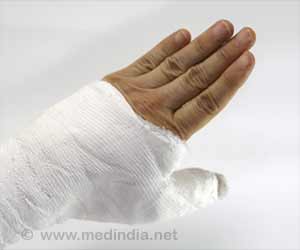