A research team at the Arizona State University (ASU) has taken a significant step in boosting the efforts to prevent Zika virus, which affects pregnant women and babies are born with severe brain birth defects. The world's first plant-based Zika vaccine developed by ASU Biodesign Institute scientists is more potent, safer and cheaper to produce.

Qiang Shawn Chen, a scientist at the Biodesign Center for IVV and professor in the School of Life Sciences, "Our vaccine offers improved safety and potentially lowers the production costs more than any other current alternative, and with equal effectiveness. We are very excited about these results."
Worlds First Plant-Based Zika Vaccine


Many potential Zika vaccines have shown promising results in the early animal and human trials. In 2016, the Food and Drug Administration approved the first human testing of a Zika vaccine candidate and a $100 million U.S. government-led clinical trial is underway. However, currently, there are no licensed vaccines available to combat Zika virus.


‘The plant-based vaccine uses the smallest and unique part of the Zika virus that can induce a potent and robust immune response. ’


Now, a research team led by Chen have come up with a better vaccine candidate based on a key Zika protein. For the past decade, Chen has worked on plant-based therapeutics and vaccines against West Nile virus and Dengue which come from the same Zika family called flaviviruses.

To date, many scientists have tested several kinds of Zika vaccines on mice, including one made from DNA and another from an inactivated form of the virus. A single dose of both the vaccines was effective to induce antibodies that protected the animals from becoming infected when they were exposed to the virus. The heat-killed vaccine can increase the risk of accidentally injecting a live version of the virus due to an error made in the vaccine production protocol.

Chen and his team have been producing low-cost vaccines in plants to fight devastating infectious diseases. For the current study, the team investigated a vaccine against a part of a Zika virus protein called DIII, which plays a key role for the virus to infect people. All the flaviviruses have an envelope protein on the outside part of the virus. It has three domains.

"The domain III has a unique stretch of DNA for the Zika virus, and we exploited this to generate a robust and protective immune response that is unique for Zika," said Chen.

Initially, the team grew the envelope protein in bacteria, then switched to prepare the DIII protein domain in tobacco plants.

In a mouse model, the research team performed immunization experiments, which induced antibody and cellular immune responses that have been shown to confer 100 percent protection against multiple Zika virus strains.

The research team used the complete Zika envelope protein for their vaccine for the second group. Envelope protein domains I, and II are similar to West Nile and dengue viruses, and this can cause a dangerous cross-reactive immune response.

"When you make the full native envelope protein as the basis for a vaccine, it will induce antibodies against DI, DII and the DIII domains of the protein. Those who have been prior exposed to DI and DII of other members of the Zika virus family may be prone to developing very bad symptoms, or in some cases, fatalities for dengue," explained Chen.

The plant-based vaccine uses the smallest and unique part of the Zika virus that can produce a potent and robust immune response. The research team used a pseudovirus (fake virus) that displays only the DIII part of the envelope protein on the surface. Chen said that this is the potent vaccine than other previous vaccine versions.

Chen is confident that his DIII-based protein vaccine will be potent, safer and cheaper.

"We did a test to make sure that the vaccine produces a potent protective immune response, but also, that it does not produce antibodies that may be cross reactive for dengue, West Nile, yellow fever or others," said Chen.

"This is an excellent example of the brightest minds quickly coming together, with public support, to take on one of the most significant public health challenges of our time. That's the essence of Biodesign at its best, and we hope this important proof-of-principal of a Zika vaccine can be translated quickly into the clinic," said, Josh LaBaer, executive director of the Biodesign Institute.

"Above all, we have to ensure the utmost safety of any Zika vaccine, especially because the people who will need it most, pregnant women, have the most worries about their health, and the health of the fetus. This has to be 100 percent safe and effective," said Chen.

Chen hopes to begin the first phase of a human clinical trial in the next two years. The findings of the study is published in the journal Scientific Reports.

Zika virus is a self-limiting febrile illness with symptoms of a headache, rash, and myalgia. Zika is primarily transmitted by daytime mosquitoes. But other routes of transmission include sexual transmission.

During the Zika pandemic, women were told not to become pregnant because babies were born with a severe brain defect called microcephaly, in which the head and brain is underdeveloped. There have also been cases of vision and hearing defects and learning disabilities associated with the severity of the infection.

Guillain-Barré is a serious complication that occurs due to Zika virus infection. It is an immune-mediated disease affecting the peripheral nervous system, leading to a severe peripheral neuropathy. This can cause muscle paralysis and can result in death in some cases. 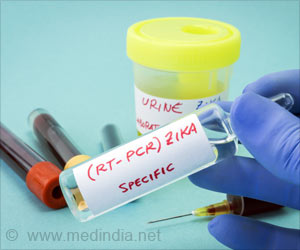 Natural Antibodies: Potential Cure of Zika Virus Identified
Natural antibodies have been identified in the blood of people infected with Zika, that will help in neutralizing the infection.
READ MORE