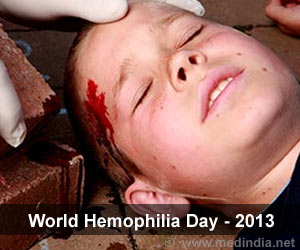 World hemophilia day is observed on the 17th of April each year. The theme for this year 2013, is "close the gap" of hemophilia care around the world.

The day is celebrated by the World Federation of Hemophilia (WFH) to create awareness, improve treatment of hemophilia and other bleeding disorders and to harness funds and volunteers for the cause.

Hemophilia is a bleeding disorder that occurs because the blood plasma lacks a protein necessary for clotting. There are two types of hemophilia -

In both these types of hemophilia the severity of the disease depends on the extent of the deficiency.

A male with the defective gene will have the disease, as men have only one X-chromosome. An affected man will not be able to pass on the disease to his sons as they  would inherit only the  Y genes from him.

Symptoms of hemophilia include severe bleeding after circumcision or injury, frequent falls, swollen and bruised joints, especially when the child is learning to walk.

Those with moderate or mild hemophilia may actually not bear the consequences of the disease until they are injured or undergo a surgery. On the other hand those with the severe form of the disease will suffer internal injuries too (besides the usual external ones) which may result in severe bone deformity, breathing problems, hematuria or brain damage.

WFH has been liaising with various other groups and organizations to bridge the gap in hemophilia care, by improving and sustaining treatment for affected people across the globe.

More and more people need to be aware of the disease and also the methods involved in the management. With careful monitoring and timely medical help to avoid complications a person can live with this severe disorder.