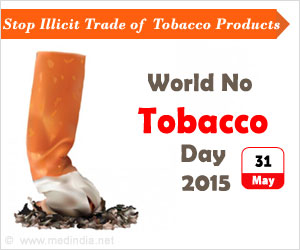 Tobacco use is the world's leading cause of preventable death. One person dies from a tobacco-related illness every six seconds, which is equivalent to around 6 million people a year. The World Health Organization (WHO) estimates that deaths related to tobacco use will increase to more than eight million per year by 2030.

Underscoring the health hazards related to tobacco use and advocating for efficient policies to reduce tobacco consumption, the WHO and partner organizations mark 'World No Tobacco Day' (WNTD) on May 31 every year.


The illicit tobacco trade encourages tobacco use among youngsters and people who generally have lower incomes by providing tobacco products at lower prices. The tobacco mafia avoids government taxes through unlawful manufacturing and smuggling. This affects a nation's economy as the revenue from taxes might otherwise be spent on public services, including health care.

As part of continuing efforts to curb the illegal trade, the WHO urges its 194 member states to sign the "Protocol to Eliminate the Illicit Trade in Tobacco Products."

The Protocol aims to eliminate all forms of illicit trade in tobacco products.

So far, 8 countries have ratified the Protocol. The Protocol needs approval of 32 more countries to become an international law.

Dr. Vera da Costa E. Silva, Head of the WHO Framework Convention on Tobacco Control, said that the protocol requires a wide range of measures controlling the tobacco supply chain.

"Measures include the licensing of imports, exports and manufacture of tobacco products; the establishment of tracking and tracing systems and the imposition of penal sanctions on those responsible for illicit trade. It would also criminalize illicit production and cross border smuggling. The protocol faces overt and covert resistance from the tobacco industry. Manufacturers know that once implemented, it will become much harder to hook young people and the poor into tobacco addiction," explained Silva.


Why Illicit Trade of Tobacco Products is Detrimental to Your Health

Action Plan for the Public

Smokeless Tobacco Use Rising in India, Finds Report
In India, the use of smokeless tobacco is on the rise especially among women, since it does not have the stigma of smoking attached to it, says report.
READ MORE

Women in India Smoke and Use Tobacco More Than Men
Oncologists say that tobacco companies advertise their products to women in India and China in such a way that it makes smoking look socially acceptable.
READ MORE