Watch Out! Weight Gain During Vacation May Add to Long Term Obesity Woes 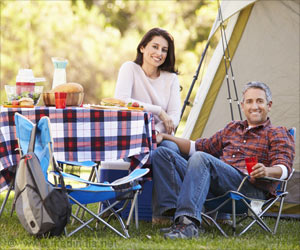 Weight gain during vacations is a common occurrence but a recent study unearths some startling facts associated with vacation weight gain. Holidays are a great time to unwind from the rigors of work and to relish delicacies that you may have thought sinful during the normal course of your life. When you travel, you see exotic places and taste local food, eating more than you normally would. It is quite common that you put on a little weight but you never seem to think twice about that.

Researchers from the University of Georgia's Family and Consumer Sciences found that adults who were on vacation for a period ranging from one to three weeks showed an increase of one pound in weight. This is a very alarming situation as the average American puts on only one to two pounds per year. When a considerable portion of that weight gain comes from only a week or more of eating, it is highly unhealthy, claim the researchers.

Holiday Weight Gain Linked to Obsession With Political Correctness
You may be choosing unhealthy options to serve your guests as you do not want to offend someone else, researchers are suggesting.
Advertisement
‘Weight gain during vacations does more harm than expected, leading to creeping weight gain and associated complications.’
Tweet it Now


This study was conducted by Cooper JA from The University of Georgia and Tokar T from Texas Tech University.

Weight Gain Shockers
While you are hitting the gym, keeping a check on food intake those troublesome kilos just refuse to leave the body. There are various unthought-of reasons behind not losing weight. Check it out!
Advertisement
The endless eating binges and lazy times enjoyed during vacations resulted in a mismatch between energy intake and energy requirement, resulting in weight gain. However, a return to the routine did not aid in losing this additional weight. This led to, what is now being called, 'creeping obesity'

This is the first study that focused on adult weight gain during vacation; there have been other studies on school children. These studies too showed that children added to their weight during vacation time than during school days. Alexander Ag and colleagues studied over 200 first and second graders to find that weight gain increased during winter vacations, affecting the BMI growth of the children.

Highlights of These Studies:
The study has brought to the fore weight gain during vacation and holidays and the significance of:
References:

Top 10 Reasons for Weight Gain
Unintentional weight gain can be due to various reasons, but here are some of the most common reasons why you'd pack on the pounds.