Watch Out For These Healthcare Tech in 2016 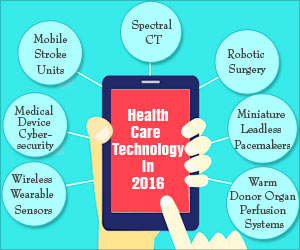 Innovations in healthcare have made diagnosis easier and treatments more effective. The ECRI, a non-profit organization has listed out and provided unbiased information about the top 10 innovations and issues that may interest hospital administrations in the New Year. While some of these are entirely new, others are modifications of devices that are already available:

Mobile Stroke Units: Mobile stroke units are equipped to diagnose and treat a stroke well before the patient can reach the hospital. A clot in the brain that may cause a stroke can result in death of brain tissue if it is not dissolved soon. Thus, time is a critical factor in the treatment of stroke. Mobile stroke units connect with stroke specialists through telemedicine, carry out tests to diagnose the cause of the stroke, which include blood tests and CT scan, and even administer treatment, all of which may be carried out even before the patient reaches the hospital.

Medical Device Cybersecurity: Devices like pacemakers are often connected electronically to the patient's medical health records. Hackers could access the health records, which may include personal information like address of the patient. This highlights the necessity to make access to the information more secure. Hospital administrations may want to address this aspect to increase safety of patient records.


‘Innovations in healthcare technology are out to change the way treatment is imparted for several diseases.’


Wireless Wearable Sensors: Wireless sensors are small devices that record patient information like heart rate and glucose levels, which is sent wirelessly to a data collection system. An abnormality of note is detected immediately, and further action may be taken as warranted. The sensors are either attached to close fitting clothing, incorporated into accessories like a wristband, or used as patches on the skin. Among the newer sensors to look for this year is one that prevents pressure ulcers, and another that can record abnormal movements in patients with a brain disorder. Sensors of heart function can detect changes, which can determine if the patient requires admission or not.

Miniature Leadless Pacemakers: A pacemaker is a small device that is surgically implanted and controls heart rate in patients who have a problem with maintaining heart rate and rhythm. Newer pacemakers being developed are smaller, do not have leads and are introduced into the right ventricle through catheterization. These can avoid complications due to the leads like lead migration, or infections during surgery. Their disadvantage is that they can pace only one chamber of the heart.

Blue-violet LED Light Fixtures: A new light fixture emits light that can disinfect the walls and air of a room in a healthcare setting. It can therefore reduce the spread of infection from one patient to another.

New High-cost Cardiovascular Drugs: Three new high-cost cardiovascular drugs were approved by the FDA in the past year. Alirocumab and evolocumab belong to a group of drugs called PCSK9 inhibitors. These injectable drugs reduce high cholesterol levels in patients who do not respond to the conventional drugs. Another drug, entresto is used to treat patients with severe severe heart failure in place of the usual ACE inhibitors. It belongs to a group called angiotensin receptor neprilysin inhibitors.

Robotic Surgery: Robotic surgery is a commonly used technique in several surgical settings. It has expanded its usefulness from prostate and uterus removal to liver, kidney, heart, and colon surgery, as well as hernia repair. Hospitals that use robotic surgery may want to evaluate newer models of the same robots, or robots manufactured by newer companies to reduce disadvantages of the older systems and expand their usefulness to several different types of surgeries.

Spectral CT: Unlike regular CT scans that mainly detect bony changes, spectral CT has the ability to detect structural changes in soft tissues like muscles. Newer techniques have improved the capability of the device to diagnose various pathologies. Spectral CT has the possibility of being used to detect conditions affecting abdominal organs like the kidneys, liver and pancreas.

Injected Bioabsorbable Hydrogel: A bioabsorbable hydrogel is available to protect the rectum from damage when a patient receives radiation therapy for prostate cancer. The gel is injected into the space between the prostate and the rectum. Here, it forms a solid barrier, which prevents radiation from reaching the rectum. The barrier remains in place for three months following the injection, after which it forms a liquid that is gradually absorbed by the body and is excreted in the urine.

Warm Donor Organ Perfusion Systems: A warm donor organ system prevents donor heart and lungs from damage, thus increasing the chances that they can be used in a patient who needs them. The system is in contrast to the currently used cold storage for harvested organs.

Newer devices no doubt appear glamorous, but the cost factor should be kept in mind while evaluating them. Hospitals will have to put in an initial investment, which will most likely pay off in the long run. The cost implications for the patient and the availability of insurance will also have to be considered before using these devices for routine treatment.

Researchers Develop Tiny Robotic Tentacles for Soft Robotic Microsurgery
The tiny tentacle can curl itself into a circle with a radius of 200 micrometers, which is ideal for microsurgery such as endovascular operations.
READ MORE

Indian-origin Surgeon Performs First Robotic Surgery for Advanced Kidney Cancer in the US
The surgery is an minimally invasive procedure, which uses four robotic tools. It has been performed on nine patients with advanced kidney cancer.
READ MORE