The potential of vitamin D in asthma management has been of much interest, as low vitamin D levels have been linked to increased asthma attacks. Role of vitamin D supplementation has been tested in clinical trials, especially by its effect on acute and severe attacks of asthma, the symptoms and any change in the lung function among all age groups suffering from asthma.
Vitamin D Supplements Can Reduce Severe Asthma Attacks


‘An oral vitamin D supplementation reduced the risk of severe asthma attacks requiring hospital admission or emergency department attendance from 6% to around 3%.’


Asthma is a disease condition that affects the airways. The disease is often associated with breathlessness and wheezing that occur at recurrent intervals and vary in frequency and severity. It attacks all age groups but often starts in childhood. The team of Cochrane researchers found seven trials involving 435 children and two studies, involving 658 adults.

The study participants were ethnically diverse, reflecting the broad range of global geographic settings, involving Canada, India, Japan, Poland, the UK, and the US The majority of people recruited to the studies had mild to moderate asthma, and a minority had severe asthma.

Most people continued to take their usual asthma medication while participating in the studies. The studies lasted for between six and 12 months.

Study Findings The Cochrane Review's lead author, Professor Adrian Martineau from the Asthma UK Centre for Applied Research, Queen Mary University of London, said, "This is an exciting result, but some caution is warranted. First, the findings relating to severe asthma attacks come from just three trials: most of the patients enrolled in these studies were adults with mild or moderate asthma. Further vitamin D trials in children and adults with severe asthma are needed to find out whether these patient groups will also benefit. Second, it is not yet clear whether vitamin D supplements can reduce risk of severe asthma attacks in all patients, or whether this effect is just seen in those who have low vitamin D levels to start with. Further analyses to investigate these questions are on-going, and results should be available in the next few months."

He also pointed out that in the study, vitamin D was added on to asthma medication the patients were already taking. He explained: "We don't want people giving up taking their asthma treatment."

He also warned against taking vitamin D without advice.

"Going to see your GP is a key part of the message we want to give - I don't think it would be appropriate to just start taking vitamin D without knowing whether you have vitamin D deficiency or not and we don't yet know what the threshold of vitamin D is below which you will have a benefit."

More About Vitamin D The Cochrane review has been published in the Cochrane Library. 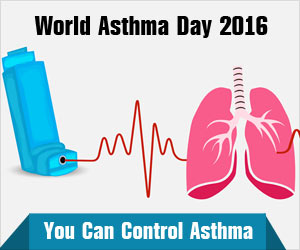 World Asthma Day 2016 - 'You Can Control Asthma'
World Asthma Day focuses on raising awareness on chronic respiratory disorder that is contributing to thousands of deaths every year globally.
READ MORE