Unmutated Form of P53 Protein is the Key to Cancer Prevention

P53 is the tumor suppressor oncogene protecting the genome from cellular stress and playing a role in cancer. This gene usually guards the genome and plays a major role in repairing DNA damage caused by ultraviolet radiation and chemicals. However, when mutated, p53 switches from serving as a protection against cancer to causing aggressive cancers
Unmutated Form of P53 Protein is the Key to Cancer Prevention

When this gene becomes mutated, the protein becomes stable and abundant accumulating in the nucleus of cells thereby causing cancer. This dual nature of p53 has been puzzling scientists and there was much to be understood about the molecular mechanisms governing its stability and function.

The research team at the University of Wisconsin, Madison led by cancer scientists Richard A. Anderson and Vincent Cyrns reported the discovery of an enzyme regulator (PIPK1-alpha and its lipid messenger PIP2) of p53 which plays a role in cancer. This enzyme is a nuclear phosphoinositide kinase complex.


The research team found that when cell stress occurs either due to DNA damage or any other cause, the enzyme gravitates towards p53 and produces PIP2 which also binds to it and thereby, creates interaction between p53 and molecules called small heat shock proteins.

Professor Cyrns said that small heat shock proteins are good at stabilizing proteins and this type of strong binding with p53 activates its cancer-causing role.

The study also demonstrated that interrupting the PIP2 enzyme pathway can prevent mutant p53 from accumulating and causing damage. Professor Anderson said that eliminating the mutated form of p53 can prevent cancers.

Cryns says that despite p53 being one of the most frequently mutated genes causing cancer, they still did not have any drug that targeted it.

The research team is now on to discovering inhibitors for PIPK1-alpha which could be used to treat tumors caused by p53 mutations. They hope to find methods to block the kinase or other molecules that bind p53 and lead to accumulation of the protein in the cell nucleus.

The study was published in Nature Cell Biology. 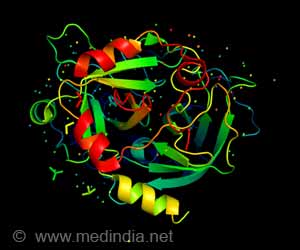