Tuberculosis Treatment Time Could Be Lessened by Higher Doses of Rifampin

Rifampin (one of the first-line anti-tuberculosis drugs) taken at higher doses killed more tuberculosis (TB) bacteria in sputum cultures and did not increase the adverse effects of treatment, according to a randomized controlled phase 2 trial conducted in Lima, Peru.

The results of the trial have been published online in the American Thoracic Society's American Journal of Respiratory and Critical Care Medicine in an article named "Efficacy and Safety of High-Dose Rifampin in Pulmonary Tuberculosis: A Randomized Controlled Trial."
Tuberculosis Treatment Time Could Be Lessened by Higher Doses of Rifampin


The findings are significant because with a high enough dose of daily rifampin a treatment period of less than the standard six months may be possible. The drug also has other benefits: it has the most potent sterilizing effect among the four first-line agents, is available throughout the world, and costs only pennies per capsule.


‘Tuberculosis (TB) treatment regime consists of taking a minimum of four pills for around six months to get cured of the disease. The current study shows that higher doses of one of the drugs called rifampin increased the elimination rate of the TB bacterium and could pave the way for a shorter treatment period.’


Earlier studies have looked at the effectiveness of killing the TB bacterium wit higher doses of rifampin given intermittently but found that the higher doses were more toxic than lower doses.

Treatment for tuberculosis consists of an intensive phase of 2 months, followed by a continuation phase of either 4 or 7 months (total of 6 to 9 months for treatment). The first-line anti-TB drugs given are isoniazid, rifampin, pyrazinamide, and ethambutol.

"Six months of treatment with four drugs--often delivered with support and supervision--represents a substantial burden on the health care system, as well as on the patient," Dr. Velásquez said. "Patients who cannot complete the full regimen may not be cured, which permits ongoing transmission and the development of drug-resistant TB."

Adults, 180 in number who were diagnosed with new, drug-susceptible TB participated in the trial.

During the following four months of continuation therapy, participants in all three trial arms received standard doses of rifampin and isoniazid.

One drawback of the trial was that the researchers could not find that rates of culture conversion (a marker indicating that a patient is cured of, or is recovering from, tuberculosis) were different among the three trial arms after the eight-week intensive treatment phase.

"The difference was too modest at the tested doses for successful treatment shortening," Dr. Velásquez said. "However, these results, taken together with other recently published reports, support efforts to increase doses of rifampin to 35 mg/kg/day and possibly higher until the maximum tolerable dose is identified."

Tuberculosis (TB) is an infectious disease that mostly affects the lungs. The bacterium that causes the disease Mycobacterium tuberculosis can also damage other parts of the body.

The mode of transmission of TB is primarily through the air; it spreads from one person to another when a person with TB of the lungs or throat coughs, sneezes, or talks. Symptoms include a bad cough that lasts 3 weeks or longer, weight loss, loss of appetite, weakness, and fever.

Not everyone who gets infected with TB bacteria becomes sick or has symptoms. As a result, there are two TB-related conditions: latent TB infection (LTBI) and TB disease.

If a person has TB infection, they cannot pass TB germs to other people but will need to stay on medicine for 3, 6, or 9 months, so they do not get TB disease. If a person has TB disease, they will need to take TB medications for at least 6 months; it takes at least 2 to 3 weeks of taking the pills to no longer spread TB germs to other people. Patients need to stay on the medicines to be cured even if they start to feel better.

TB can be diagnosed through skin tests, blood tests, x-rays, and other tests.

Worldwide, there are nearly 10 million new cases of tuberculosis (TB) and 1.5 million deaths due to TB each year. TB treatment is currently recommended for six months. The preferred regimen for patients with newly diagnosed pulmonary TB consists of giving four drugs: isoniazid (INH), rifampin (RIF), ethambutol (EMB), and pyrazinamide (PZA). The drugs are given in two phases.

Shortening treatment by as little as two months would benefit patients and health systems. 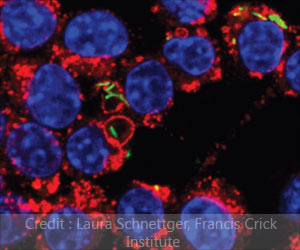 Natural Mechanism To Kill Tuberculosis Bacteria Discovered
Potential treatments for tuberculosis could be developed by the discovery of a natural mechanism that traps and kills the TB bacteria.
READ MORE