The Legal Conundrum If Marital Rape is Criminalized

Last week, the Indian government said that the concept of marital rape is not applicable in the country, as marriage is sacred as per the mindset of the Indian society.

In a written statement, Haribhai Parathibhai Chaudhary, the Minister of State for Home Affairs, said, "It is considered that the concept of marital rape, as understood internationally, cannot be suitably applied in the Indian context due to various factors, including level of education, illiteracy, poverty, myriad social customs and values, religious beliefs, mindset of the society to treat the marriage as a sacrament."


The government's stand came after the recommendation by the UN Committee on Elimination of Discrimination against Women to criminalize marital rape in India.


No Legal Prosecution of 'Marital Rape'

"First of all, I don't buy the argument that marital rape cannot be criminally prosecuted in India," says Nandita Rao, a lawyer at the Delhi High Court. "Section 498A of the Indian Penal Code (IPC) clearly states that any form of cruelty that causes physical or mental agony is punishable by three years' imprisonment. It's a non-bailable offence."


There is no separate law against marital rape but a husband who has sex with his wife without her consent can be charged under Section 498A for cruelty, but NOT rape. "Rape laws were created with a patriarchal mindset... a basic premise that a woman will never lie about being raped because no woman would make such an accusation that would besmirch her honor. The word 'honor' is crucial here. It's presumed that a woman would never willingly sleep with a man who is not her husband, and hence, by default, her protector. So in this context, her 'honor' is not sullied when her husband takes his conjugal rights for granted," she explains.

Section 375 of the IPC that prosecutes rape clearly states that sexual intercourse by the man with his own wife, wife not being under 15 years, is not rape. It also provides for imprisonment and fine as punishment for the rapist but not if the woman is his wife. Section 122 of the Indian Evidence Act does not permit evidence to be submitted in marital rape unless it's related to physical/mental battery and abuse. 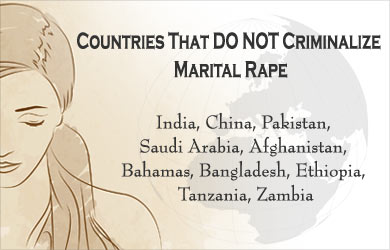 Does this mean non-consensual sex is acceptable just because it's under the 'protection' of marriage? "No, absolutely not!" retorts Rao. While she finds the minister's comments offensive, her argument is not that marital rape should not be prosecuted. "How will you prove marital rape? In any rape case, the burden of proof is not with the plaintiff, which means that the onus of responsibility is with the man to prove that the sex was consensual. In that case, he has to provide evidence...where will that come from? Also, if there is going to be a separate law that criminalizes marital rape, it cannot be clubbed with the existing rape law, as the rules of evidence need to be different."

A valid point that Geeta Ramaseshan, Senior Lawyer, Madras High Court, concurs with, and adds that a law cannot just be about punishing the offender - it should also be about protecting the rights of the victim. "After a woman is married, her husband takes her to his village or town or city where his family members live. If there is marital rape or any other form of sexual abuse, where is she going to get the support to get legal help?" she avers.

Hardly surprising, however, is the male argument that a law against marital rape could be misused or abused by women to victimize men. "Abuse of law has nothing to do with gender - we have a systemic problem that encourages abuse," says Ramaseshan. "A few false allegations do not mean that you throw your baby out with the bath water. And a failure to prove rape does not imply the woman's claims are false."

She urges people to have a debate and discussion about what it means to have a law that penalizes marital rape. "Before demanding a separate law, let's understand a few things - concept of marriage in the Indian society, how one defines rape in this context, and also look at evidence to prove or disprove it," she adds.

In most Indian marriages, the gender roles remain skewed in favor of men. Being married confers a 'positive' status to the woman, which is greatly enhanced by motherhood. A woman's primary duty is to her husband and his relatives - subservience is expected and socially accepted as a sign of 'good upbringing'.

"Our entire social, political and judicial system is based on the premise that a wife should give into the needs of her husband, without question. The tag of 'good wife' is achieved, largely, by a woman's submission to her husband's conjugal rights. In such a scenario, sexual assault or any form of physical abuse is inevitable," elaborates Prasanna Gettu, CEO, International Foundation for Crime Prevention and Victim Care (PCVC), Chennai.

Latest figures by the National Crime Records Bureau (NCRB) show that 93 rapes happen every single day in India and 70% of women endure some form of domestic abuse. In a study on domestic violence in multiple centers in India, the International Centre for Research, a Washington-based NGO, said one in every five Indian men (surveyed) admitted to forcing their wives into sex - 85% of men admitted to being violent with their wives, 57% have sexually abused their wives and 32% were violent when their wives were pregnant.

"Nine out of 10 cases of domestic violence that come to me have sexual violence in it," rues Gettu. "Most of the time, they are unable to say 'No'; they just go along with it to avoid future unpleasantness. They could be living in a joint family or have grown-up children or perhaps they just don't want to fight over this."

WHO Data Reveals A Third of Women Globally Victims of Domestic Violence
A series of studies by the World Health Organization indicates that current efforts to prevent domestic violence are insufficient.
READ MORE