Holi, one of the traditional Indian festivals marks the celebration of fertility and good harvests. It is also called as the festival of colors or the festival of sharing love as it welcomes the season of spring with its new colors and life. There is a ritual during the festival, where people throw colors at one another. It is to be noted that although playing with holi colors is a celebration of festivity and fun, it could however, end up turning into a misery affecting people's health, and sometimes causing health hazards as well.


On the day of holi celebration, people get together in a common place and throw colors on their family members, friends and even total strangers. Kids and adults come out of their homes and smear each other with bright shades of colors. People exchange sweets and snacks among neighbors and friends. People also dance to the beats of Holi songs and popular folk music. The festival also marks the event from Hindu mythology where prahlada's aunt "Holika" who had been blessed with immunity against fire gets burnt in the process of trying to kill her nephew. People also burn huge bonfires as a symbolic commemoration.


‘Beware of the hazardous ingredients that are involved in the making of holi colors and their consequences before you smear or splash them on your dear ones!’

The spring season, during which the weather changes, is believed to cause viral fever and cold. Originally, the holi colors were made up of the bright new flowers that blossomed during the spring season. Different shades of colors were made from those flowers, which acted as the raw materials. The colors were traditionally made of neem, kumkum, haldi, bilva, and other medicinal herbs. Also, the trees from which the flowers were taken possessed medicinal properties that were beneficial to people's skin.

Modernization and industrialization have replaced the natural sources of the colors with cheap industrial dyes that are synthesized via chemical processes. This results in people suffering from various health hazards after the celebration. The colors are made up of chemicals and the dry color powders are made up of 2 components - a base and a color giving substance.

Here's a List of Popularly Used Colors and Their Chemical Ingredients

The base is usually either wheat flour or starch and their contamination could be hazardous. Sometimes to give the colors a sparkling effect, Mica dust is added to the dry powders.

Major Health problems encountered after the celebration of Holi: Dermatoses

Skin problems occur very frequently after the celebration using colors where people experience burning sensation and irritation. The face is the most affected part of the body mainly because it is where people commonly apply colors. Hands are also affected as they are involved in the preparation of colors and smearing them on people. Apart from these, people also scrub vigorously in order to get rid of the colors post celebration, which causes skin abrasions. The dermatoses that follow holi celebration are mainly due to allergic or irritant contact skin inflammations (dermatitis). There might be cases when people experience worsening of skin diseases that they already exhibited like eczema, acne and paronychia.

Ocular Problems: When colors are splashed and smeared over the face, it is likely that they enter the eyes and cause problems like conjunctivitis or corneal abrasions. The major colors reported with higher incidence of ocular toxicity are green or bluish-green which are made up of malachite green which could cause ocular irritation and sometimes epithelial defect.

There have been no quality checks on the holi colors that are manufactured in India. The colors that are either sold freely or in packets at the market give no information about the their source contents or any possibilities of toxic effects that they might cause. Recently, there have been quite a number of NGOs who campaign on safe practices to follow while using colors during holi celebration. Some of them have also been making safer colors sourced from natural ingredients like flowers and vegetables and marketing them.

We can prevent health hazards after holi celebration only when we take efforts at a large scale such as References :
Source: Medindia

Beauty Expert Shares Skin and Hair Care Tips Before, After Holi
Simple and easy skin and hair care tips during Holi can do wonders and sustain your youth and beauty.
READ MORE 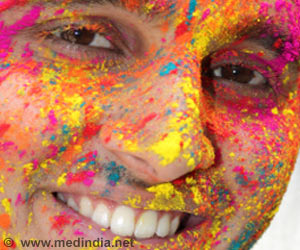 Care for Your Skin Before and After Playing Holi
Holi comes once a year enjoy it and have fun. Once you are outside - spattered by friends with color, the child in you takes over you merrily use whatever is at hand and blow the consequences.
READ MORE 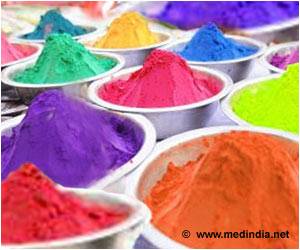 Celebrate Holi With Some Safety Measures
Celebrate fun-filled Holi festival this year with natural colors to protect your skin, eyes and hair and follow some safety measures.
READ MORE 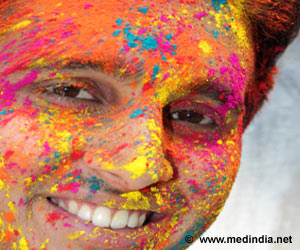 Tips for Skin Care and Hair Care Pre and Post Holi
With Holi approaching on Thursday, it is important to protect yourself from the harsh colours and chemicals that is used, as it may damage your skin and hair.
READ MORE 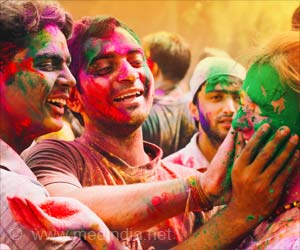 Holi Colors: How to Clean Your Face After Holi?
You are having Holi fun with colors and then comes clean up time to protect your skin. Learn easy ways to get rid of holi colors that can harm your skin if there are chemicals in the colors.
READ MORE

Christmas Feast, Its always Grand with Cake and WineHoli Colors: How to Clean Your Face After Holi?
Sign up for Wellness Consult a Doctor Sign up for Selfcare