Written by Amrita Surendranath
Medically Reviewed by The Medindia Medical Review Team on April 19, 2017 at 9:08 PM 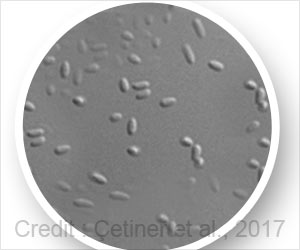 When certain bacteria are exposed to excess water, it can lead to osmolysis, where the cell bursts due to large amount of water or osmotic imbalance. A research team from the University of Maryland has now found that the pathogenic Pseudomonas aeruginosa utilizes membrane channels that are tension activated to prevent swelling and bursting. This bacterium is the prime cause for hospital acquired infections and an understanding of how it persists could be used to develop methods to eliminate it. The study was published in the journal General Physiology.

Bacteremia
Bacteremia is the presence of viable bacteria in the bloodstream. Blood cultures are used in diagnosis and antibiotics are used to treat bacteremia.
Advertisement
‘Mechano-sensitive channels are special channels present on the cell surface which allow water out of the cell during sudden water excess.’

Pseudomonas is a highly adaptable bacterium that can survive even in harsh environment. In a hospital, it is present on the surface of medical equipment and can infect patients who are immunocompromised and lead to life threatening conditions.

P.aeruginosa can survive in very harsh environments and one of the main reasons behind their adaptability is that they can survive sudden increase in water. During rainfall, there would be an increase in water level surrounding bacteria and this leads to osmotic entry of water into the cell. As the water continues to enter, the cells burst after swelling and die. However, in certain bacteria, including the gut bacteria Escherichia coli, once the level of water inside the cell increase beyond a certain level, mechano-sensitive channels in the walls of the bacterium open. This allows small osmolytes to leave the cell, thereby preventing the cell from swelling up.

Acute Ear Infection
Ear infection is very common in babies and young children. The type of ear discharge depends on the underlying cause.
Advertisement
A research team from the University of Maryland led by Dr. Sergei Sukharev discovered through their experimental studies that P. aeruginosa can tolerate larger amounts of osmotic shocks when compared to E. coli. The higher adaptability of P. aeruginosa could be due to lowered permeability to water and its ability to release osmolytes faster.

MscL- The organism has one type of MscL channel. This type of channel predominates and is present at a far greater density in P.aeruginosa than in E.coli. This leads to the release of more number of large osmolytes from the organism.

Dr. Sukharev said that the current study would help in gaining a better understanding of how the physiological response to osmotic pressure occurs in bacteria and the adaptations that they carry to survive it. The study also showed that P. aeruginosa had a better osmotic stability when compared to E. coli.

The current study conducted by Dr. Sukharev and colleagues show that the ability of the organism to survive in an environment in sudden water rich environment which is evidenced by the presence of this organism in numerous reservoirs in the hospital like
Another alarming factor about P. aeruginosa is that is found to be associated with multidrug resistance. Patients who acquire this pathogen are often faced with longer period of hospitalization with increased risk for mortality. 50% of patients acquire a fatal infection due to this condition. An insight into the mechanisms that improve their adaptability can be utilized to develop novel drug therapy that limit the spread of this infection

New Treatment for Antibiotic Resistant Bacteria
The process of removing antibodies from the blood stream, helps to treat antibiotic resistant bacteria and reduces the effects of chronic infections.

Preventing Infections With Edible Seeds
A new study has revealed the presence of certain chemicals on the surface of edible seeds which can help prevent P.aeruginosa infections.

Find a Hospital Loram (2 mg) (Lorazepam) Blood - Sugar Chart Noscaphene (Noscapine) Find a Doctor Sanatogen Drug - Food Interactions Diaphragmatic Hernia A-Z Drug Brands in India Vent Forte (Theophylline)
This site uses cookies to deliver our services.By using our site, you acknowledge that you have read and understand our Cookie Policy, Privacy Policy, and our Terms of Use  Ok, Got it. Close
×