Supplementation of Vitamin B3 Prevents Glaucoma

Vitamin B3 can be effective to treat glaucoma, finds a study conducted by a research team led by Jackson Laboratory Professor and Howard Hughes, Medical Investigator Simon W.M. John.

The study was conducted in mice predisposed to glaucoma. Adding vitamin B3 to drinking water was found to be effective in preventing glaucoma.
Supplementation of Vitamin B3 Prevents Glaucoma


In the study published in the journal Science, the authors noted that vitamin B3 administration eliminated the majority of age-related molecular changes, providing significant protection against glaucoma. This finding shows promise for developing an inexpensive and safe treatments for glaucoma.


‘Glaucoma is one of the leading causes of irreversible blindness. Administration of vitamin B3 boosted the metabolic reliability of aging eye cells, thereby preventing glaucoma.’

Glaucoma is a neurodegenerative condition, affecting 80 million people worldwide. In most patients with glaucoma, intraocular pressure or high pressure inside the eye causes dysfunction and loss of retinal ganglion cells (neuronal cells that connect the eye to the brain via the optic nerve).

Age is a major risk factor for glaucoma, which contributes to harmful elevation of intraocular pressure and increased neuronal vulnerability to pressure-induced damage.

"We wanted to identify key age-related susceptibility factors that change with age in the eye and that therefore increase vulnerability to disease and in particular neuronal disease," said John.

Effect of Vitamin B3 in Preventing Glaucoma

The research team conducted a variety of genomic, metabolic, neurobiological and other tests in mice susceptible to inherited glaucoma. The team discovered that NAD (Nicotinamide adenine dinucleotide), a molecule vital to energy metabolism in neurons and other cells declined with age. The decline in NAD levels reduces the reliability of neurons energy metabolism.

"There's an analogy with an old motorbike. It runs just fine, but little things get less reliable with age. One day you stress it: you drive it up a steep hill or you go on a really long journey and you get in trouble. It's less reliable than a new bike and it's going to fail with a higher frequency than that new bike," said John.

"Like taking that big hill on your old bike, some things are going to fail more often. The amount of failure will increase over time, resulting in more damage and disease progression."

Administration of Vitamin B3 (nicotinamide, an amide form of vitamin B3, also called niacinamide) increased the metabolic reliability of aging retinal ganglion cells.

"Because these cells are still healthy, and still metabolically robust even when high intraocular pressure turns on, they better resist damaging processes," said JAX Postdoctoral Associate Pete Williams, first author of the study.

The research team also found that a single gene therapy application of Nmnat1 (the gene for an enzyme that makes NAD from nicotinamide) prevented glaucoma in a mouse model.

"It can be a problem for patients, especially the elderly, to take their drugs every day and in the correct dose. So gene therapy could be a one-shot, protective treatment," said Williams.

"Gene therapies through injections into the eye have been approved for rare human genetic eye disorders. Their demonstration of an important age-dependent factor may enable gene therapy for more common eye disease." The research team is pursuing clinical partnerships to test the effectiveness of Vitamin B3 in treating glaucoma patients. 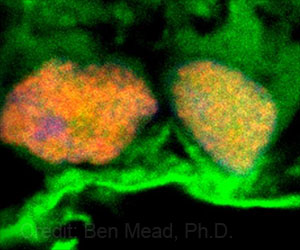 Glaucoma Can Be Treated With Stem Cell Secretions
Exosomes are stem cell secretions that seem to protect the retinal cells against glaucoma, reveals study.
READ MORE