The findings of the study appear in Diabetologia, the journal of the European Association for the Study of Diabetes [EASD]).

What is Skin Autofluorescence (SAF) in Diabetes?

Type 2 diabetes is showing an alarming rise globally and cardiac complications occurring in diabetes are a major cause for reduced quality of life and premature death in these patients. Risk factors known to increase the occurrence of type 2 diabetes include obesity and high fasting blood glucose levels.
Skin Autofluorescence Predicts Future Risk of Diabetes and Heart Disease


Fluorescence is a phenomenon that occurs when a substance/chemical absorbs light or other electromagnetic radiation and gives out a light of a different wavelength. It typically occurs when the absorbed radiation is in the ultraviolet region of the spectrum, (invisible to the human eye), while the light emitted is in the visible region, which gives the fluorescing chemical a distinct color.


‘Skin autofluorescence test is a rapid and non-invasive screening test and can be used in non-medical settings such as at supermarkets or drug stores to know if your at risk of diabetes and heart disease.’
Read More..


Persons with high blood glucose levels have increased levels of chemicals called advanced glycation end products in their skin. The research team obtained the readings when the chemical fluoresce (skin autofluorescence) was illuminated with a light source.

The current study hoped to determine whether skin autofluorescence readings can predict future risk of type 2 diabetes, heart disease and premature death in the general population

The prospective study included 72880 participants of the Dutch Lifelines Cohort Study, who had baseline investigations performed between 2007 and 2013. They had validated baseline skin autofluorescence values available, and were not found to have type 2 diabetes or heart disease at during this period
"This is the first prospective study to examine SAF as a predictor for type 2 diabetes, CVD and mortality in the general population,"according to the study team.

Advanced glycation end products (AGEs) are toxic chemicals formed when protein or fat in the body tissues combine with sugar in the bloodstream. Persons with high blood sugar levels, such as diabetics, are at increased risk of forming large amounts of AGEs, which can accumulate in various tissues of the body.

It may soon be possible to know if your at risk of developing diabetes or heart disease in a supermarket or drug store by means of a rapid and non-invasive screening test so that suitable measures can be taken to reduce the risk and avoid future complications.

In the words of the study authors, "Our study supports the clinical utility of SAF as a first screening method to predict type 2 diabetes, CVD and mortality. Other risk indicators, such as the presence of the metabolic syndrome, require more extensive measurements. The quick, non-invasive measurement of skin autofluorescence may even allow use in non-medical settings or public locations such as supermarkets, pharmacies or drug stores as a first estimate of risk." 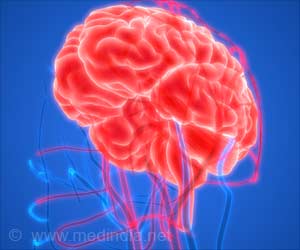 Lifestyle Changes Can Improve Blood Circulation in Type 2 Diabetes
Type 2 diabetic patients who are overweight or obese can improve the blood flow in the brain with long-term physical activity and by lowering calories in the diet.
READ MORE