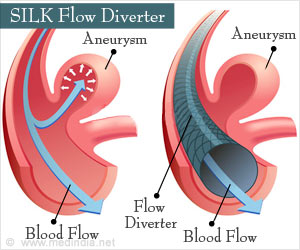 Silk flow diverter seems to be useful in treating complex intracranial aneurysms. A study which indicated the same was published in 2015 issue of Journal of NeuroInterventional Surgery.

An intracranial aneurysm is an enlargement of an artery in the brain. Depending on its shape, it can be classified as saccular, fusiform or blister-shaped. It can burst and result in immediate death. It can also exert pressure on the surrounding brain. Several treatments are available for intracranial aneurysm. Among them are flow diverters. Flow diverters are small devices that are placed in the artery leading to the aneurysm. In due course, clots form in the aneurysm and with subsequent changes, the aneurysm shrinks in size.


A study was conducted to evaluate the benefits of using a type of diverters called SILK Flow Diverters for treating patients with intracranial aneurysms. Information on 92 patients was obtained from eight centers across Canada between January 2009 and August 2013. Among the patients included in the study, 16 had aneurysms located in posterior circulation, whereas in 76 patients aneurysms were in the anterior circulation of the brain. The aneurysms varied in size from 2 to 60 mm, with saccular shape aneurysms being the most common and constituting 75% of the cases.


The researchers found that in patients treated with SILK flow diverters, 83.1% of the aneurysms were completely or nearly completely occluded during follow-up. The procedure however was not without complication. Complication rate was higher for fusiform-shaped aneurysms (p<0.001) than other two forms. Another study was published in the Interventional Neuroradiology Journal, which also showed efficacy of flow diverter stents in treating aneurysms. The study was conducted on information obtained from 77 patients with 87 aneurysms who were treated with two different types of flow diverters: the Pipeline Embolization Device and SILK flow diverter from October 2010 to September 2013.

In this study, the overall aneurysm occlusion rate at 6 months was 80% and at 18 months was 84%. Eleven patients showed complications, out of which three patients died. Thus, according to studies conducted, flow diverters to be a satisfactory treatment, especially in the treatment of complex intracranial aneurysms. At present flow diverters find their application in complex aneurysms, which includes large and giant aneurysms, wide-neck aneurysms, and recurring aneurysms. In addition, flow diverters may also be useful in very small ruptured aneurysms which are untreatable using other techniques. Larger studies are however necessary to establish their use in clinical practice.
References : 1. Shankar JJ. et.al. SILK flow diverter for complex intracranial aneurysms: a Canadian registry.J Neurointerv Surg. 2013 Nov; 5(3): iii 11-5.

Aneurysm
An aneurysm is an abnormal "ballooning" in blood vessels usually in the wall of arteries.
READ MORE

Arrhythmias or Brain Aneurysm - Treatment is the Same
For the very first time, a technique normally used to treat brain aneurysms, is now used to treat life-threatening arrhythmias.
READ MORE

Growth in Cerebral Aneurysms Size Increases the Risk of Rupture
According to a new study published online in the journal Radiology , cerebral aneurysms of all sizeseven small ones below seven millimetersare 12 times more likely to rupture if they are growing in size.
READ MORE

Patient Remains Conscious Throughout the Brain Tumour Surgery
A 77-year-old man in Canberra underwent a surgery to have a life-threatening blister from his brain removed while remaining conscious throughout the operation.
READ MORE