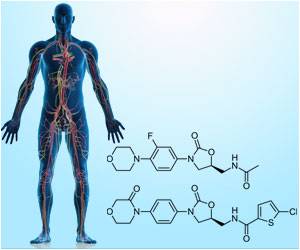 Rivaroxaban is an oral anticoagulant or blood thinner that is more convenient to use with a better safety profile compared to currently used warfarin or heparin.

Venous thrombosis is a condition where clots are formed in deep veins. These clots block the flow of blood through the particular blood vessel.  Parts of the clots could dislodge and travel through the circulation.   These dislodged clots are called emboli.  Emboli can cause serious complications like stroke, pulmonary embolism and heart attack.   The condition of clot and emboli formation in the deep veins is called venous thromboembolism.

Acute venous thromboembolism is currently treated using injectable heparin (or a low molecular weight heparin) along with oral warfarin (an oral anticoagulant or blood thinner that blocks the effect of vitamin K).  Heparin is stopped once warfarin shows its effect. However, this current treatment has the following disadvantages:


 Warfarin takes time to act; hence, hence patient is initially given injectable heparin.  This means that he has to be admitted into a hospital.
Advertisement
 The patient needs repeated tests for clotting of blood done while taking warfarin to make sure that optimal anticoagulation is achieved and the patient does not suffer from complications like bleeding.

 Some food and drugs taken concomitantly could alter the level of warfarin in blood and either lead to a decrease in effect or cause side effects.

Rivaroxaban is a novel oral anticoagulant or blood thinner and is currently undergoing evaluation in the United States. It has been approved for use in some countries to prevent venous thromboembolism in patients undergoing planned hip or knee surgery.  It prevents clotting by blocking the action of a clotting factor X.  In contrast to warfarin, it does not need repeated laboratory testing.  Food does not affect its level and it interacts with very few drugs.

A recent study showed that Rivaroxaban was similarly effective as the standard treatment of enoxaparin (like heparin) and a vitamin K blocker (like warfarin) in patients with confirmed deep venous thrombosis.   The risk of bleeding was also similar in both groups.  Thus, one drug rivaroxaban could replace the currently used two drugs.  Since rivaroxaban is taken orally, it may be useful in treating patients of DVT on an outpatient basis.

The study also showed that rivaroxaban reduced chances of recurrence of clotting in patients with DVT or pulmonary embolism who had already received 6 to 12 month prior anticoagulant treatment.  These patients had a small risk of major bleeding.

Thus, rivaroxaban could emerge as a simple treatment for deep vein thrombosis that is effective, easy to administer and does not require regular monitoring.

Warfarin
This medication is an anticoagulant, prescribed for deep venous thrombosis and pulmonary ......