Multi-drug resistant bacteria are a major cause of concern among healthcare facilities as they contribute to an increase in morbidity and mortality, compared to the infections by the bacteria that can be treated relatively easily with antibiotics. Such bacteria are also found to increase the period of hospitalization. A research team from the University of California San Diego School of Medicine along with the U.S. Navy Medical Research Center has developed a novel method of treating a critical patient from a multi-drug resistant bacterial infection. The scientists used bacteriophages, which are viruses known to engulf specific strains of bacteria, to treat the infection.

The study was presented at the Centennial Celebration of The Institute Pasteur's Bacteriophage Research by Dr.Biswajit Biswas, Head of the Phage division and one of the co-authors of the study.
Phage Therapy Saves Patient With Multi-Drug Resistant Bacterial Infection


‘Bacteriophages are viruses that infect bacteria which have potential benefit in treating drug resistant bacterial infections.’


According to the World Health Organization, antibiotic resistant microbes are one of the greatest threats to global health, development, as well as for food security. It is estimated that antibiotic resistant strains of micro-organisms will result in the death of at least 50 million people every year by 2050.

The first author of the study, Dr. Robert Schooley said, that the patient, Tom, was in a very critical stage and the scientists approached the FDA for approval to treat the patient with bacteriophages. This is the first known case of a patient being treated using intravenous injection of bacteriophages.

Dr. Tom Patterson, PhD, from UC San Diego School of Medicine's Department of Psychiatry, contracted an infection while on a holiday in Egypt, which led to pain, a racing heartbeat, vomiting and nausea. His condition was diagnosed as pancreatitis and his condition became worse as the therapeutic measures used did not offer a cure. A pancreatic pseudocyst was identified and when the fluid was cultured, it was found that Dr. Patterson was infected with a multidrug-resistant strain of Acinetobacter baumannii.

Drugs that were used for treatment included
The bacterial isolate that had infected Dr. Patterson was found to be resistant to all these antibiotics. He developed septic shock as the infection spread and was on the verge of entering into a coma.

Dr. Patterson's wife Dr. Strathdee is the Director of UC San Diego Global Health Institute and has worked to reduce HIV infection and mortality rates from Afghanistan and India to Mexico.

An estimated 1031 bacteriophages exist and every phage has evolved to infect a specific strain of bacteria. They do not infect the other cells in an organism.

Normally phage therapy is administered orally but as they were meant to address a complex infection, they were introduced into Dr. Patterson intravenously who woke up from his coma within 3 days.

Initially, the doctors had been worried about the toxicity caused due to the endotoxins secreted by the bacteriophages. However, there were no adverse reactions to the therapy.

The bacteria that infected Dr. Patterson developed resistance to the strain of phage that was used initially but the scientists altered the phage strains, some of them isolated from sewers, to improve treatment. Dr. Patterson was completely cleared of A. baumannii after a few months of treatment and was discharged from the hospital.

Dr. Patterson lost a lot of weight post treatment, as he had been on intravenous fluid for many months. These effects were not associated with the phage therapy but physical therapy was required to help regain strength.

In phage therapy, every individual would require phage cocktails based on the specific strains of organisms present, unlike antibiotics. This will pave the way for personalized medicine.

Multidrug resistant strains of bacteria have the potential of leading to large scale infections, however, the potential use of bacteriophages in the treatment of such bacteria could be used to control the spread of such infections. 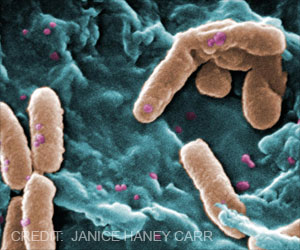 New Treatment for Antibiotic Resistant Bacteria
The process of removing antibodies from the blood stream, helps to treat antibiotic resistant bacteria and reduces the effects of chronic infections.
READ MORE

Impetigo
Impetigo is a contagious bacterial skin infection mostly affecting children and is characterized by blister-like sores that could form pus and later scabs.
READ MORE