Written by Dr. Simi Paknikar
Medically Reviewed by The Medindia Medical Review Team on July 11, 2013 at 11:58 AM 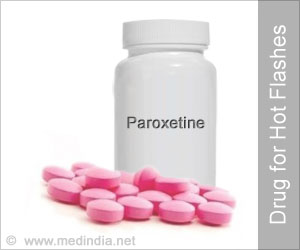 A new drug, Brisdelle that contains a low dose of the antidepressant paroxetine has become the first non-hormonal medication for the treatment of hot flashes.

Hot flashes, or hot flushes, are a common symptom experienced by women during the perimenopausal and menopausal periods. It occurs due to a fall of estrogen levels during this time. Women experience a feeling of warmth especially in the face region, which may be followed by sweating. The symptoms could become bothersome especially if they occur too frequently or wake the patient up at night.

Hormonal replacement has been commonly used to treat hot flashes. However, its use has been associated with the development of breast cancer and heart disease. It cannot be used by patients who have already suffered from or at a risk of suffering from these conditions. Therefore, hormonal replacement has not been widely preferred for this condition.


Women will now have a non-hormonal option available for the treatment of hot flashes. The US Food and Drug Administration has approved the use of an antidepressant paroxetine for the treatment of hot flashes. Paroxetine is also used for conditions like panic disorder and obsessive compulsive disorder. However, the dosage used for this purpose will be less than that used to treat depression. The new drug will contain 7.5 mg paroxetine, whereas the lowest dose available for depression is 10 mg. Paroxetine could reduce the efficacy of tamoxifene, a drug that is used in certain breast cancer patients and to reduce the risk of breast cancer in certain women; therefore, it should not be used in women taking tamoxifene.

Paroxetine is associated with side effects including the risk of suicidal thoughts. The approval for this drug for hot flashes comes despite disapproval from advisors to the FDA who felt that the benefits of the drug could not offset the risks.

Hormone Replacement Therapy can be likened to an oasis in the desert for women in the throes of ...
This site uses cookies to deliver our services.By using our site, you acknowledge that you have read and understand our Cookie Policy, Privacy Policy, and our Terms of Use  Ok, Got it. Close
×