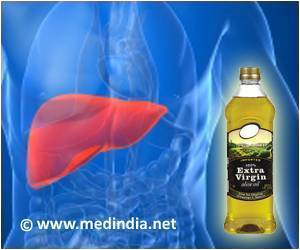 Olive oil may contain compounds that protect against liver damage, suggests a new study in rats.

Olive oil, an integral part of Mediterranean diet, is known to have numerous health benefits that protect against heart diseases and some cancers. It also modifies the immune and inflammatory responses of the body. A new study showed that extra virgin olive oil and its hydrophilic extract protect against oxidative damage of the liver.

An impaired antioxidant defence of the body is one of the major causes for the development of heart disease, cancer and premature degeneration of the nerve cells. A healthy human body maintains a balance between the generation of Reactive Oxidant Species (ROS) which cause oxidation, and the counteractive antioxidant defences. ROS are by-products of normal metabolic processes and accidental exposure to occupational chemicals like pesticides accelerate their production.


A recent study reported that rats fed on a diet containing olive oil were protected from liver damage following exposure to a moderately toxic chemical called 2, 4-Dichlorophenoxyaceticacid (2, 4-D). 2, 4-D is one of the most widely used herbicides that causes liver damage. It is known to produce oxidative stress, and/or deplete antioxidants.
Advertisement
In the study, rats fed on the herbicide 2, 4-D were supplemented with either extra virgin olive oil, or one of its extracts (hydrophilic or lipophilic).

2, 4-D caused significant liver damage in the rats. Intake of extra virgin olive oil or its hydrophilic fraction induced a substantial increase in antioxidant activity and decreased markers of liver damage. These two contained a high amount of phenols, which could contribute to the antoxidant effect. The lipophilic fraction, which was deprived of phenols, failed to produce a protective effect.

Authors of the study concluded that extra virgin olive oil and its hydrophilic extract protect against oxidative damage of liver cells. More detailed studies dealing with the effect of antioxidant compounds separately and/or their interactions could corroborate these results.

Olive Oil Protects Liver From Oxidative Stress
A new study has revealed that extra-virgin olive oil can protect the liver from oxidative stress....