Written by Dr. Lakshmi Venkataraman, MD
Article Reviewed by The Medindia Medical Review Team on September 8, 2016 at 8:30 AM
Health In Focus

Relationship between Obesity and Type of Stroke

The effect of obesity on the two types of stroke namely ischemic and hemorrhagic stroke was analyzed in a study conducted in the UK.
Obesity in Women Affects Different Types of Stroke in Distinct Ways


1.3 million women in the United Kingdom with an average age of 57 were followed over a period of 12 years. During this time 20,549 had a stroke.

"We found that the risk of ischemic stroke, which is associated with a blockage of blood flow to the brain and is the most common stroke subtype, is increased in overweight and obese women. By contrast, the risk of hemorrhagic stroke, which is associated with bleeding into the brain, is decreased in overweight and obese women," said study author Gillian Reeves, PhD, with the University of Oxford, United Kingdom. "Our findings add to the growing body of evidence that different types of stroke have different risk profiles."

A stroke can occur when the blood vessel that carries oxygen and nutrients to the brain is either blocked by a clot (ischemic stroke) or ruptures (hemorrhagic stroke). When that happens, the affected part of the brain dies due to lack of oxygen.

Stroke is a medical emergency and needs prompt institution of treatment to minimize brain damage and reduce the risk of complications.

Majority of strokes (nearly 85%) are ischemic strokes and the rest are hemorrhagic strokes.

Transient Ischemic Attacks (TIA) occur when the supply of blood to the brain is temporarily interrupted, leading to a "mini-stroke" that may last between 30 minutes to several hours. These have to regarded seriously and are often a sign of a full blown stroke in the near future.

Relationship of Increasing BMI to Ischemic and Hemorrhagic Stroke

The study showed the following relationship between increasing BMI and the two types of stroke.

The scientists also combined results from previously published studies on the subject. The collected data from worldwide available evidence confirmed that the risks associated with an increasing BMI are consistently greater for ischemic than for hemorrhagic stroke.

The body mass index (BMI) or Quetelet index is derived from the height and weight of an individual. It is defined as the body mass divided by the square of the height, and is universally expressed in units of kg/m2, derived from mass in kilograms and height in metres.

BMI aims to quantify the amount of tissue mass (muscle, fat, and bone) in an individual in order to categorize the person as underweight, normal weight, overweight, or obese based on that value.

Overall Relationship Between Obesity and Stroke

Kathryn Rexrode, MD, MPH, from Brigham and Women's Hospital in Boston, wrote an accompanying editorial on the study. She sounded a note of caution that the lower risk of hemorrhagic stroke did not mean that overweight and obese women had a reduced risk of stroke overall.

So higher BMI was not associated with protection or reduced risk of total stroke," she said. "Obesity is a substantial stroke risk factor for all ages and even more alarming for young adults." 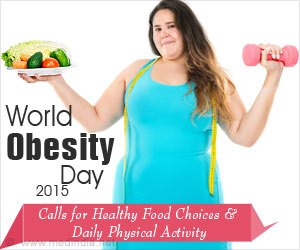 Around 17% Indian Pregnant Women Suffer from Obesity and Diabetes
At least 17% of the pregnant women in India are suffering from obesity and diabetes and carry a high risk of transferring the diseases to their babies.
READ MORE