LUKE arm is the novel robotic prosthetic arm developed that helps amputees control hand movements by thought, and to touch and feel things once again, something that is impossible with standard prosthetic arms.

The findings of the study appear in the latest edition of the journal Science Robotics.

Professor Gregory Clark, University of Utah biomedical engineering associate, said: "Just providing sensation is a big deal, but the way you send that information is also critically important, and if you make it more biologically realistic, the brain will understand it better and the performance of this sensation will also be better."


‘An amputee fitted with the prosthetic arm can now feel objects and identify if they are soft or hard, and pick them up by exerting the right pressure as well as accomplish fine and delicate tasks that can never be done with standard prostheses having claws or metal hooks for hands.’
Read More..


Achieving this involved complex mathematical algorithms and calculations and recording impulses from the arms of primates to recreate a similar model of how touch and feel is interpreted by the human brain. This model was used in the LUKE arm

Keven is one of seven study subjects, who lost part of this left arm and hand to an electrical accident in 2002. There are about 1.6 million amputees in the US, in whom anxiety and depression are common. After trying the LUKE arm, Mr. Walgamott said: "It almost put me to tears. It was really amazing. I never thought I would be able to feel in that hand again."

Scope of the Study and Future Plans

The team hopes that by next year three test subjects will be able to take the device home pending government approval.

In summary, the LUKE arm will be a godsend to amputees making them independent and productive and also improves their quality of life by reducing anxiety and depression. 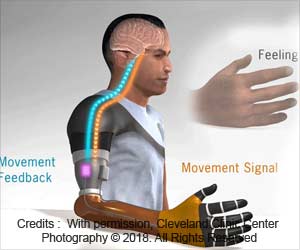 Giving Sensation to Prosthetic Arms
Losing an arm doesn't have to mean losing all sense of touch, thanks to prosthetic arms that stimulate nerves with mild electrical feedback.
READ MORE

Novel Amputation Technique That Makes A Prosthetic Limb Feel Real
Scientists have developed a new approach that set the standards for future limb amputation, according to a new study.
READ MORE

New Device Stimulates Nerves to Bring Sense of Touch to Prosthetic Hand
The device appears as a macro-sieve and works to stimulate motor neurons in muscles that transmits signals to the sensory neurons.
READ MORE