Nicotine exposure could cause serious adverse effects on a developing human embryo at the cellular level, suggests a new study from Stanford University, USA.

The study used single-cell RNA (ribonucleic acid) sequencing of human embryonic stem cell (hESC)-derived embryoid bodies. Using this technique, it was found that exposure of these embryoid bodies to nicotine for three weeks affected many vital functions, including contraction of the heart muscle cells (cardiomyocytes). For example, intercellular communication was disrupted, cell survival was decreased, and gene expression patterns were dysregulated.
Nicotine can be Harmful to Human Embryos at the Single-Cell Level

The research team envisaged that this new stem cell model will shed light on the effect of nicotine on the developing human fetus, both at the organ level as well as at the individual cell level. It is plausible that the new technology could be used for screening drugs and environmental toxicants that could affect fetal development.


‘Nicotine can harm human embryos at the single-cell level. This has been revealed by a new single-cell RNA sequencing technology, which can be used to screen drugs and toxins to prevent fetal damage.’
Read More..

Maternal smoking during pregnancy poses a high risk to the developing fetus for developing birth defects and other complications. These include miscarriage, stillbirth, growth-restriction, premature delivery, and low birth weight. These can cause long-term adverse effects such as cardiovascular, respiratory, metabolic, endocrine, neurological, and psycho-behavioral complications after birth.

Nicotine, the primary active chemical constituent of tobacco smoke, is the main culprit for the increased risk of birth defects. Moreover, the recent introduction of new products such as e-cigarettes has hampered the progress made so far, towards eliminating tobacco products from the market.


Animal Studies on Nicotine Toxicity and its Limitations

Much work has already been done to investigate the negative effects of nicotine on fetal development. Animal models, especially rodent models, have been used for these experiments. These animal studies have firmly established that nicotine is detrimental to fetal development. However, since there are interspecies differences, it is doubtful whether the animal results could to translatable to humans.

Conventional studies have evaluated nicotine toxicity in human cells through bulk RNA sequencing. However, these studies failed to shed any light on what was happening at the single-cell level due to nicotine toxicity. As a result, there is limited understanding about the effects of nicotine on human embryonic development at the cellular, sub-cellular and molecular levels.


How Did the New Study Overcome the Limitations?

The limitations of the animal studies were overcome by utilizing single-cell RNA sequencing technology, which is a highly robust and powerful tool for sequencing cellular RNA molecules. This sequencing technology was used to analyze the effects of nicotine exposure for three weeks on the transcriptomes (total RNA molecules in a cell) of 12,500 cells. These cells arose from human hESC-derived embryoid bodies, which are 3-dimensional (3D) aggregations of various types of pluripotent stem cells that are capable of giving rise to various organs, such as the heart, liver, brain, and other organs.


What Did the New Study Find?

The study findings revealed that nicotine exhibited the following effects at the cellular and molecular levels:

In this regard, Wu says: "We hope this will lead to the discovery of novel biomarkers that can help doctors better prevent, diagnose, and treat these diseases," He adds: "In addition, we plan to utilize our hESC-derived embryoid body model and single-cell-sequencing technology to investigate the wider effects of other harmful conditions such as air pollution on human embryonic development."

The study validated the new technology for evaluating the effects of drugs and environmental toxicants on human embryonic development. What still remains to be done is replicate the entire body-physiology during pregnancy in the hESC-derived embryoid body model.

The study highlights the fact that nicotine in e-cigarettes, nicotine gums, and other nicotine products could have severe detrimental effects on the developing human fetus.

With reference to the importance of the study, Wu says: "These results are especially important in that they provide a scientific basis for educating the public, especially young women, to keep away from smoking when they are pregnant or considering having a family."

The study was funded by the National Institutes of Health (NIH), Bethesda, Maryland, USA.

Health Hazards of Smoking: Pregnancy
Smoking during pregnancy increases the risk of pre-term delivery, leads to still births. It may slow down fetal growth.
READ MORE

E-cigarettes During Pregnancy Can Cause Cleft Palate in Babies
E-cigarettes pose health risks despite being widely considered a safer alternative to tobacco cigarettes. Vaping during pregnancy causes facial defects in fetus
READ MORE 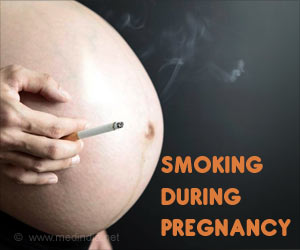