A treatment that targets the stroma around a pancreatic cancer and makes blood vessels leaky, thereby facilitating the entry of chemotherapy drugs into the cancer cells, could help in the treatment of pancreatic cancer. Australian scientists used this approach in their experiments on pancreatic cancer. Their work was published in Science Translational Medicine.

Pancreatic cancer remains one of the most difficult cancers to treat, with a 5-year survival rate of only 7%. Researchers the world over are working on solutions to deal with the deadly cancer. Pancreatic cancer affects the pancreas, a gland in the abdomen that secretes pancreatic juice required for digestion, as well as insulin and glucagon, which are required to control the glucose levels in the blood.
New Treatment Could Benefit Pancreatic Cancer Prognosis


Pancreatic cancer is treated with surgery, chemotherapy and radiation. The late diagnosis of the cancer often makes it difficult for a complete surgical removal. Another problem with pancreatic cancer is that it is surrounded by tissues called stroma that make it impermeable to chemotherapy drugs like gemcitabine and Abraxane (paclitaxel protein bound), commonly used in its treatment. Targeting this shell to allow the entry of chemotherapy into cancer cells has been the focus of recent research.


‘The prognosis of pancreatic cancer can improve if the tissues surrounding the cancer are targeted, thereby allowing chemotherapy drugs to enter the cancer.’


Researchers from Australia have tried out an approach in which the stroma is first attacked using a drug called fasudil, a Rho-kinase inhibitor. Fasudil also made the blood vessels surrounding the cancer cells leaky, thus allowing the entry of chemotherapy drugs. The researchers carried out their experiments on mouse models of pancreatic cancer. The mice were treated with fasudil for three days, followed by chemotherapy. The researchers found that:
The researchers also demonstrated that pancreatic cancers with a large amount of stroma or surrounded by dense blood vessels were more likely to benefit from this approach to treatment.

Combination of Chemotherapy Drugs in Pancreatic Cancer Prolongs Survival Rate
The combination of gemcitabine and capecitabine in pancreatic cancer patients may be the new standard of care after surgical removal of the tumor.
READ MORE 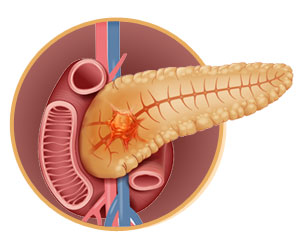 Possible New Avenues in Pancreatic Cancer Treatment
More than one type of fibroblasts surrounds a pancreatic cancer. The discovery regarding the stromal cells may improve treatment options for pancreatic cancer.
READ MORE