Scientists have zeroed in on a molecular defect present in almost all patients with Parkinson's disease (PD) and those at increased risk of developing the disease. The finding could enable early detection as well as testing of treatments that could prevent or retard the progression of the disease, according to the research team at Stanford University.

"We've identified a molecular marker that could allow doctors to diagnose Parkinson's accurately, early and in a clinically practical way," said Xinnan Wang, MD, PhD, associate professor of neurosurgery. "This marker could be used to assess drug candidates' capacity to counter the defect and stall the disease's progression."
New Diagnostic Marker can Detect Parkinson's Disease Early

The findings of the study appear in the journal Cell Metabolism.

Detection of Biomarker In Patients

These findings indicate that levels of Miro molecule is elevated in patients with Parkinson's disease and can be a useful biomarker.

The findings of the study suggest that the biomarker may be able to detect Parkinson's disease early and can help to test out newer treatments that appear to be safe and effective.


‘Identification of the increased levels of the biomarker (Miro molecule) in patients enables early detection of Parkinson's disease as well as test the capacity of specific drug molecules to reverse the defect and halt the progression of the disease.’
Read More..


Dr Wang feels that clinical trials of the promising drug/s can happen within a few years. He said: "Our hope is that if this compound or a similar one proves nontoxic and efficacious and we can give it, like a statin drug, to people who've tested positive for the Miro-removal defect but don't yet have Parkinson's symptoms, they'll never get it."

About Parkinson's Disease in Brief

Parkinson's is a common neurodegenerative disorder affecting approximately 35 million people worldwide. Most are sporadic and 5%-10% are familial, running in families and inherited due to known genetic mutations. The cause of the disease is unclear and currently, there is no cure.

Symptoms of the disease include movement difficulties, issues with balance and posture, tremor, change in speech and rigidity of muscles. Treatments are available that check the symptoms but the condition is progressive. Several new treatments are being developed in the hope of a cure for this crippling condition.

Stanford's Office of Licensing Technology has filed a provisional patent to use the main compound in this study in Parkinson's and similar neurodegenerative disorders. In fact, Dr. Wang has formed a company, CuraX to hasten the production of the drug. 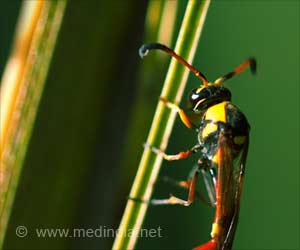 Venom of Wasp - Potential Treatment for Parkinsons Disease
The venom of the wasp Ampulex compressa is a potential therapy for Parkinson's disease. The venom has mind-controlling molecules that can cause Hypokinesia.
READ MORE

How Treatment of Parkinsons Disease Gets Affected by Gut Bacteria?
The gut bacteria affect the bio-availability of levodopa, which is used in the treatment of Parkinson's disease. The drug is converted to dopamine that cannot cross blood-brain barrier.
READ MORE