A research team led by Dr. Igor Stagljar who was a professor in the University of Toronto's Donnelly Centre found that there were two genes associated with triple-negative breast cancer, which is difficult to treat.

Dr. Stagljar had a one-of-a kind way to find out how the proteins that were produced by these two genes worked.
New Protein-Protein Interaction Imaging Method could be Effective in Cancer Treatment

Epidermal growth factor receptor (EGFR) was one of the proteins and it belonged to a group called receptor tyrosine kinases (RTK). These instruct the cell to grow and multiply as a response to the signals that are received from the cell's environment.

Protein tyrosine phosphatase (PTP) is the other protein that was produced by the two genes and the main way of working was by shutting down the receptor tyrosine kinases.  The epidermal growth factor is present in the outer layer of the cell which makes it difficult to analyze using traditional methods.

The MYTH and MaMTH technologies that were developed by Dr.Stagljar and his research team which included Dr. Zhong Yao, one of the senior research associates in the lab, were used to identify that the two proteins were in direct contact with each other. It was then believed that certain forms of breast cancer were formed when the association between these two proteins was disrupted. The disruption in the link was found to result in uncontrolled signaling of RTK which lead to increased proliferation of the cells.

Dr. Yao used the MYTH and MaMTH technologies to understand the various interactions between all the RTK and the PTP present in humans. This aided in identifying more than 300 interactions that were, thus far, unknown.

Dr. Stagljar  said, "We tested interactions between almost all 58 RTKs and 144 PTPs that exist in human cells. Our map reveals new and surprising ways in which these proteins work together. These insights will help us better understand what goes wrong in cancer in order to develop more effective treatments."

RTK in Cancers
The advantage of the MYTH and MaMTH technology is in recording small interactions between membrane proteins and in their natural setting which includes yeast as well as mammalian cells. The traditional methods are unable to capture such fleeting interactions as the membranes need to be removed, which moves the membrane protein apart.

Some of the interesting finds of the study include:
The scientists hope to create a map with interactions between 3000 membrane proteins. About 500 of these were found to have a direct role in the development of many diseases among humans. 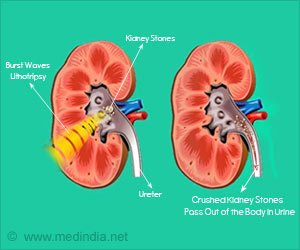 Kidney Stones Zapping Technology by NASA to Help Treat Astronauts With Stones
Astronauts are more prone to get kidney stones. Burst wave lithotripsy which detects and breaks stones, could be the next step for its treatment on Earth too.
READ MORE