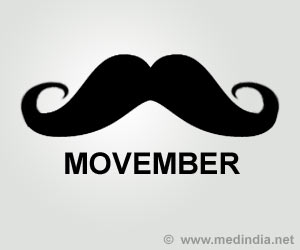 If you look at the title of this report and do not already know what it is, you would probably think it is a misprint! However, it is not! Though the word 'Movember' may not have found its way yet into the dictionary, it is a word coined to combine two words - Mo (slang for mustache) and November, and is linked to a social cause.

The idea behind this movement is simple. Every year in November, men who are clean shaven in beginning of the month grow a mustache through the month. Though the presence of a mustache may not raise eyebrows in some countries like India, it does draw attention in other countries where men rarely sport mustaches. The purpose? To raise funds and awareness regarding men's health issues.

One specific health issue that has been the focus of this organization is prostate cancer. Funds raised through this endeavor are directed towards research in the area of prostate cancer. Besides, it is also creating an online prostate cancer research community in order to facilitate exchange of ideas on prostate research.


The concept, first born in Australia in 2003, has grown to cover many countries today. The participants are referred to as Mo Bros and the women supporting them are called Mo Sistas.

The Foundation runs several events all over the world in the month of November not only to raise funds but also to increase awareness about men's health related issues. It encourages men to undergo regular check-ups and thereby detect illnesses especially cancers early at a stage when they are easily treatable.

The movement has proved to be extremely successful in raising funds in several countries over the world, especially in countries like United Kingdom and Canada.

Men Grow Tache for Charity
Many men usually clean-shaven are embracing the lost art of moustaches this month sporting modes from the pencil-thin Errol Flynn version to the coiffed homage to Ming the Merciless.
READ MORE

Growing Moustache To Raise Prostate Awareness!
Changing looks at the top to raise awareness about something at the bottom! Such seems to be the strategy of the "mo" campaigners worldwide.
READ MORE