Written by Suchitra Chari, M.S. M.Sc.
Medically Reviewed by The Medindia Medical Review Team on May 5, 2018 at 12:52 PM
Health In Focus

Researchers have now identified why some families are susceptible to migraines and how genetics could influence the type of migraine.

The study is published on May 3 in the journal Neuron.
Migraines Mostly Driven by Polygenic Common Variants


Scientists have known that migraines tend to run in families but have not been able to explain exactly how.


‘A group of genes, as opposed to specific genes could be more responsible in causing the risk of migraines that tend to run in certain families.’


"For a long time, we have been wondering why a common disease (like migraines) aggregates in families," said Aarno Palotie of the Institute for Molecular Medicine in Finland and the Broad Institute of MIT and Harvard in Cambridge, Mass.

Earlier research on migraines has identified that migraines might run in families in two ways. Performing linkage studies, scientists have identified three genes (CACNA1A, ATP1A2 and SCN1A) that are associated with hemiplegic migraine, which is a severe form of the condition that could cause stroke-like symptoms. These genes follow the Mendelian inheritance model, which means that the child must inherit the dominant allele (a form of gene) from one parent in order to get hemiplegic migraine (in other words a trait). If they get the two recessive alleles from the parents, they will not experience migraine.

The other way scientists have found by which migraines could run in families involves polygenic inheritance. When a person inherits a polygenic trait, it means a group of genes worked together to produce that characteristic. Each common genetic variant or allele might only have a small effect individually but put together the common variants tend to influence the trait or disease risk in this case the child gets.

Palotie and his colleagues performed some studies to answer questions about how migraines are inherited in families; that is, whether it was due to the few, powerful Mendelian genes or due to the polygenic accumulation of common variants, or was it a combination of both.

The researchers first developed a polygenic risk score to determine how much disease risk was caused by the common variants. They gathered data from a genome-wide association study, which is a type of study that compares genomes of individuals and finds the locations on chromosomes (known as gene loci) that differ in people with a disease. There were possibly thousands of loci linked to migraines that were incorporated into the polygenic risk score.

Next, the researchers wanted to test how much of an influence the polygenic risk score and the three known Mendelian migraine-linked genes played within a large family study of migraine sufferers in Finland. The study involved 1,589 families (made up of 8,319 individuals) of known migraine sufferers; their medical history and genetic data were collected. The family migraine cohort was the test group and it was compared to a large control group that had 14,470 people total, including 1,101 people with migraine.

Result of the Study

The researchers discovered that the polygenic common variants were driving migraine risk more than the three Mendelian genes. The data showed that common polygenic variants had a greater influence in determining things like, if a person's migraines started at an earlier age, if a person experienced more severe migraines, or if migraines ran in a person's family.

The researchers also identified 45 families among the 1,589 families that suffered from a hemiplegic migraine and sequenced their genes. More cases of migraines were driven by common variants while the rare Mendelian genes only influenced migraines in four out of 45 families. Hence, the study proved that the three rare but powerful Mendelian genes linked to a migraine influenced migraine risk to a much lesser extent than what the researchers expected.

"This really shows, in a very big sample set, that common variants are very important factors in aggregation of migraines in the family," said Palotie.

"This is of special interest for drug development," said Palotie. Even if Mendelian variants don't drive the majority of migraine cases, scientists can research how these genes impact biological pathways responsible for migraine symptoms and potentially develop drugs to target those pathways.

A headache that is throbbing or pulsing usually only on one side of the head is a migraine. During a migraine attack people are sensitive to light and sound and may become nauseous and vomit.

Fifteen to twenty percent of adults in developed countries suffer from migraines and women experience migraines more than men triggers could be anxiety, stress imbalance in food or sleep, and hormonal changes (in women).

Migraines are now believed to be controlled by genes that control the activity of some brain cells. Medicines can help relieve the symptoms or prevent an attack from occurring.

Headache | Cephalgia - Migraine
Migraine is a recurrent condition, which may or may not be accompanied by a headache. In many people it is a triad of headache, nausea/vomiting and 'aura'.
READ MORE 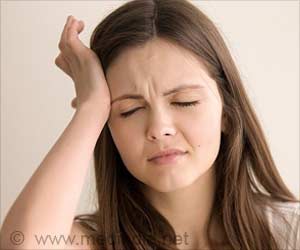 New Drug may Provide Relief Against Migraine
When all other treatments to fight migraine fail, a drug called erenumab may help relieve the excruciating headache.
READ MORE