Men who have undergone cosmetic surgery plastic surgery on their face appear more attractive, reliable, likable and friendly by others in society according to a recent study at Georgetown University Medical Center to find out how the public and society at large perceived men who have opted for cosmetic surgery.

The study was undertaken by the senior investigator, Michael J. Reilly, MD, an associate professor of otolaryngology at Georgetown's School of Medicine and plastic surgeon along with another Georgetown plastic surgeon, Steven P. Davison, MD, who is also the study co-author.


‘Face is the 'mirror of the soul, and a persons external physical appearance is often the most obvious feature seen and judged by others during social interactions. Men who undergo facial plastic surgery appear to be more attractive, reliable, likeable, trustworthy and friendly by the public and society.’
Read More..


In contrast, a study of similar facial cosmetic surgery impact on society in women in 2015 demonstrated a significant rise in society's perception of their femininity following the procedure.

Michael J. Reilly said: "Taken together, our findings suggest that both men and women undergoing facial cosmetic surgery can experience not only improved perception of attractiveness, but other positive changes in society's perception of their persona."


Cosmetic Surgery is No Longer Only for Women

Men are increasingly becoming more concerned about their appearance and personality and are opting to have cosmetic procedures done to change something they don't like when looking into the mirror.

In the past decade, there has been an exponential rise in men having cosmetic surgeries in the US than ever before. The American Society of Plastic Surgeons (ASAPS) statistics reveal that, over 1.3 million men went under the knife to alter their appearance in 2017 alone. They account for about 15-20% of the cosmetic surgery market in the US.

Facial features considered desirable in males include prominent cheekbones and chin, and a square jaw and prominent chin, while women like softer facial contours, round cheeks, bigger smile and large, wide eyes. The reasons for the sudden surge may be many including wanting to appear younger, seem more confident or even the pressure of social media.

Understanding the public perception of men's personality and attractiveness following facial cosmetic surgery will help patients and doctors alike to optimize the outcome of the procedure.

In summary, men undergoing cosmetic surgery are perceived to have improved personality traits such as being likable, friendly, trustworthy and attractive. 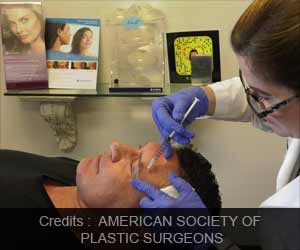 Daddy-Do-Over: More Men Undergo Plastic Surgery to Fend Off Signs of Aging
Daddy-Do-Over: More beauty conscious men are embracing their own set of treatments such as plastic surgery, cosmetic procedures, botox, and fillers to boost their confidence and improve their physical appearance.
READ MORE