Mefloquine May Be Effective in Preventing Malaria in Pregnant Women


Mefloquine Use In Pregnant Women To Prevent Malaria

Malaria in pregnant women is considered to be a major public health problem as it affects both the mother and the fetus or the newborn child. The complications of malaria may vary according to the intensity of transmission rate in a particular geographical area and the individual's level of immunity. People with high immunity levels living in a high-transmission setting may show no symptoms of P. Falciparum in pregnancy.
Mefloquine May Be Effective in Preventing Malaria in Pregnant Women


‘Five studies conducted in sub-Saharan Africa and one study in Thailand compared the effects of mefloquine with standard anti-malarial drugs and it was found that it can prevent malaria in both HIV-infected and HIV-uninfected pregnant women.’


The endpoints of the study showed that mefloquine was found to be more efficacious than the current standard treatments. Mefloquine helps in reducing the presence of malarial parasites in pregnant women (HIV infected and uninfected) and the occurrence of anemia during delivery. However, mefloquine does not reduce the maternal adverse effects such as abortion, stillbirth, low birth weight or premature infant and there is an increase in drug-related adverse effects such as dizziness and vomiting.

The adverse outcomes of mefloquine are considered to be the main barrier in using the drug, but due to its effectiveness, mefloquine can be used as chemoprevention against malaria throughout the pregnancy period. The World Health Organization also recommends the need of intermittent preventive therapy in pregnant women living in moderate to high risk for malaria transmission with a focus to decrease the disease risk from causing harm to the mother and fetus.


What are the symptoms and signs of malaria?

What steps can be taken to prevent malaria? 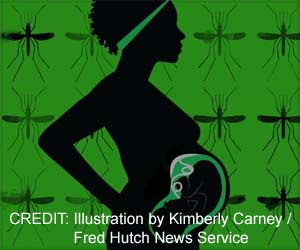 Can Malaria During Pregnancy Affect Your Babys Immunity?
Mothers infected with malaria during pregnancy could pass on their cells to the baby and affect their immunity, finds a study.
READ MORE